Why Use Sprinkler Controllers?

How Automated Irrigation Benefits Your Garden

Certainly, there are plenty of useless gadgets out there, but millions of people who’ve installed automated irrigation systems are pretty happy with their purchase.

Regarding the last factor, we’ve pretty much assumed throughout this page that you already have an irrigation system installed in your garden, and that you only want to replace an older controller or convert it to automatic. When you order a new controller, that’s pretty much all you get – wires, pipes, valves and sprinklers aren’t included. Digging up your turf and installing the necessary equipment is rarely cheap to do.

RELATED: Best Sprinkler Controllers 2022 – Save Time, Money, and the Planet

Sprinkler controllers are still a good idea, though. Fresh water is becoming ever more scarce and therefore expensive. At some point, shortages are likely to lead to major environmental and social catastrophe. There are various ways to reduce your contribution to this trend, but installing smarter watering systems is one of the best things you can do.

How Does an Electronic Irrigation System Work?

This section may be a little boring, for which we apologize, but unless you already know how the controller fits into the whole system, you won’t be able to select the one which will work best in your garden.

Since most gardeners will already be pretty familiar with how the last part works, we’ll focus on the first two and how they operate together.

The controller is the brain of the system. As you can see in our product comparison chart, there are major differences between the various models, particularly in how you instruct them on what to do and how “smart” they are at carrying out this task.

Essentially, though, their job consists of taking your instructions (along with any other inputs) and deciding when a particular valve should be turned on and off.

To Sprinkle or Not to Sprinkle?

Rain sensors are pretty much self-explanatory. These are usually sold separately and stop the controller from doing any watering for some specified period after rain has fallen. This function can be enabled or disabled during programming, which you may be able to do on a zone-to-zone basis (to keep watering the plants under your veranda when Nature has done the work for you elsewhere, for instance).

Be careful, though: many rain sensors will be activated even by a drizzle lasting two minutes, after which the controller might not water anything at all for 72 hours.

Freeze sensors, which inhibit watering when the temperature is below 32°F, are more reliable in operation.

In order to utilize more accurate information, especially about expected future conditions, our controller in the diagram further down below also receives frequent weather updates through its wi-fi connection. How well these describe the actual state of your particular yard varies, especially if your closest meteorological observatory is far away. It’s still, however, far better than relying only on a rain sensor.

If you’re really serious about caring for your garden while saving water, you can even buy a weather station of your own, link it to the data-sharing website WeatherUnderground and direct your irrigation controller to use its measurements.

From Data to Droplets

In order to actually get water from the mains supply to the sprinkler heads, electricity travels along a pair of wires to open an electrically operated valve. Also called solenoids, almost all of these valves intended for domestic environments use 24V ac power.

Looking at your controller with its cover removed, you’ll probably see a number of labeled terminals made to accept wires. Some of these will be numbered in sequence; these numbers correspond to the zones (also called “lines”). Wires are run from them to each solenoid. A typical setup can look like this: 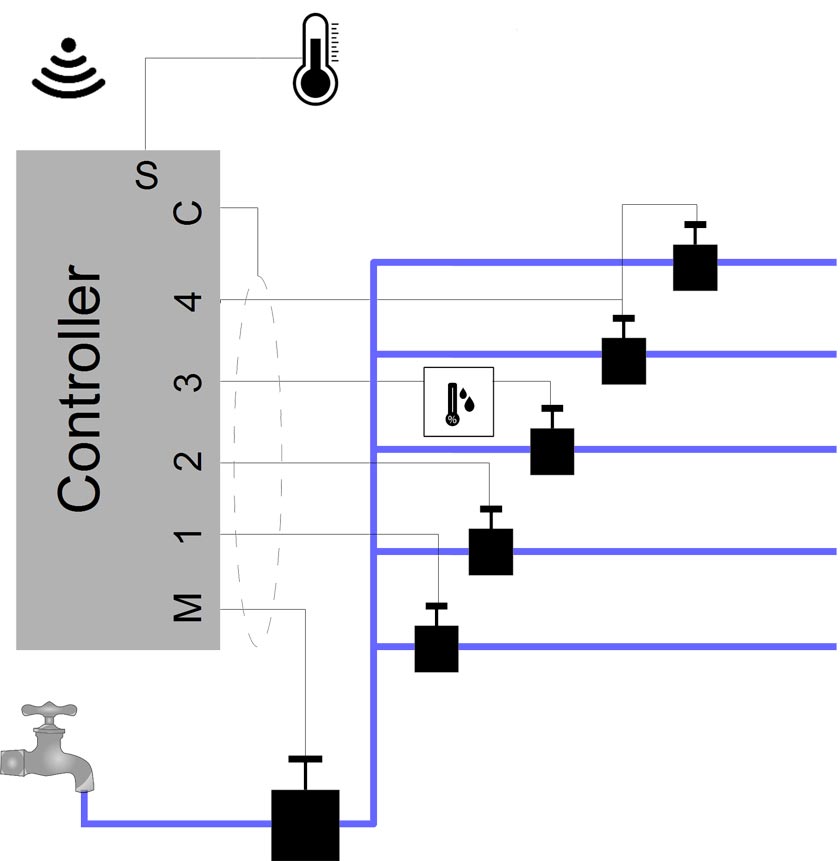 Here we have a wi-fi capable controller, possibly an Orbit 57946 B-hyve, connected to all the stuff needed to make it go “splish!” at the right times.

Note that zone 4 in the diagram above actually has two wires running from it. This is fine: both connected valves will open and shut simultaneously. This can put some strain on your water pressure, though it should not pose a problem when using something like drip irrigation. Almost all intelligent controllers will run zones in sequence rather than all at once unless they’re instructed otherwise, again to maintain water pressure and help the sprinkler heads perform optimally.

Since electricity requires two conductors to flow, one or more other electrical connectors marked “C” for “Common” are provided on the controller. This is shared between all the valves, so one wire from each valve will have to be connected to a wire screwed into this terminal. If not using multi-core wire, it might be a good idea to use a terminal block, either at your controller or where your irrigation pipes split into zones, to minimize cable spaghetti.

Some irrigation controllers have connections for sensor inputs; how these work will be described in their manuals. You can also wire a sensor directly into a specific wire like you see with zone 3. This may be useful if some of your plants have special requirements, such as a cactus that only needs to be watered if the soil moisture content drops below a certain threshold.

Just remember that there are two types of sensors: normally closed (NC) and normally open (NO). Take care with this, as the terminology is a little confusing and in fact the opposite of what you might expect. An NC rain sensor, for instance, will let electricity pass as long as it’s dry, but not when it’s wet.

Finally, some controllers also include a connection for a “master” valve, which opens whenever any zone is active and closes otherwise. This is just a kind of precaution: if any of the zone valves should fail, you won’t come home to a swimming pool you didn’t used to have. It also has another purpose: signaling a well pump to start up in sync with each irrigation cycle. How exactly this works varies depending on the type of pump, so if you’re not sure, consult an electrician.

Assuming that the piping and sprinklers are already in place, installing a new automatic irrigation controller is within everyone’s technical ability. If the solenoid valves have also been set up (perhaps because you’re replacing an older control unit), there’s absolutely no reason to call in a professional – it should take you no more than 15 minutes.

Once your new irrigation controller arrives, you may be eager to hook it up and forget about watering your garden for the rest of your life. Keep the following in mind, though.

FACT SHEET & STATISTICS - DID YOU KNOW?

When budgeting for a new garden irrigation system, $1 per square foot is a good rule of thumb. This excludes the price of an automated sprinkler controller, though having one will make the whole that much more effective.

On average, a programmable controller uses 20% less water compared to watering by hand or by manually operating sprinklers. The actual figure you can expect varies significantly depending on the type of controller and how carefully it’s been programmed.

Electronic sprinkler control systems will generally have to be replaced every 5 to 10 years, though you might well choose to upgrade before that time. Solenoid valves may last up to 15 years depending on how hard they work.

Up to 50%
Irrigation Water Wasted

According to the EPA, as much as half of the water used in gardens is lost to wind, evaporation, and runoff. A smart irrigation controller can cut this down significantly.

Researchers expect the United States’ demand for water to exceed supply around 2071 – that is, if current consumption patterns are maintained.

What Barometric Pressure Tells us About Weather