Even experienced astronomers sometimes forget that telescopes don’t really “see” anything; that job belongs to the eye. Some people just naturally have better vision, at least of the type skygazing requires, though practice does help you develop this over time.

Like eyeglasses or a flashlight, a telescope is merely a tool. It helps us observe distant wonders by:

In other words, an object that’s visible but too dark or small to make out clearly is of little use, as is a fuzzy blob. There is another aspect of vision that’s important to most of us, too: color perception.

No optical filter is really able to intensify the colors you’re interested in. Instead, they absorb unwanted wavelengths of light without reducing the intensity of those they’re designed to let through. Physically, they screw onto the bottom of your eyepiece. If you like, you can also fit one filter over another, further reducing the range of colors you see.

This might not, at a glance, seem all that useful. Isn’t gathering as much light from your target as possible always better, after all?

As it turns out, you can actually discern a lot more of whatever you’re interested in by cutting out superfluous photons:

Fine details are easily drowned out unless you take some steps to increase their prominence. This applies equally to faint stars, planetary surfaces, and celestial beasts like galaxies and nebulae.

In some cases, the unwanted light is emitted by the object itself. You may want to either focus on or exclude certain wavelengths of light in order to increase contrast and enhance certain features:

Light from other sources, both nearby and distant, can also find its way into your telescope. Particles ranging from atom-sized to microscopic have the unfortunate habit of reflecting and scattering light in all directions. The worst offender here, especially if you live in a populated area, is the atmosphere, but interstellar dust and gas will also fuzz things up for you, unless you compensate for this with the appropriate filter.

Aside from the telescope itself, a good filter set is what will really take your skygazing experience to the next level. Many novices, unfortunately, don’t realize how much a filter can do for them, what types are available, and what each can bring to the party.

Let’s take a brief tour of the subject:

One of the best reasons to own a good telescope is that it allows us to resolve planets from pinpoints of light into discernable hemispheres. Unless you have the right filter for each, though, you’ll need truckloads of magnification to see their surface details and atmospheric phenomena plainly. Removing some colors from your planetary views will noticably accentuate these.

A suitable red filter, for instance, allows you to distinguish the polar ice caps, plains, and mountain ranges of Mars much more clearly. Jupiter’s cloud bands and Red Spot, on the other hand, can be enhanced using an olive-green filter. It takes only a moment to switch out one filter for another and each one reveals a completely different aspect to a planet, making a planetary filter set a very nice addition to your astronomy toolbox.

This is certainly a useful ability to have, even on a small-aperture telescope. There is a catch, though: it’s physiologically difficult for the eye to tell the color of dim objects (day and night vision are actually handled by two different types of cells found on the retina). This means that smaller telescopes, even with the right filters, produce an image which is somewhat monochromatic to human perception.

Since the diameter of your objective reflector (or refractor) is what determines how much light actually reaches your eye, and you’ll be reducing that amount by a large fraction when you use a color filter, a scope smaller than about 150 mm will not give you the best results when used in this way.

Regardless of whether you’re using a filter, keep the following suggestions in mind when skygazing:

Looking at the Moon

Something that surprises many people when they first observe our closest natural satellite through a telescope is just how bright it is – if your eyes are especially sensitive, it can even be painful. Although moonlight isn’t physically dangerous, stepping down its brightness a little bit will help reveal a lot more of the beauty of its maria, mountains, and craters.

The moon reflects only 12% of the sunlight that reaches it, making it about as bright as a lump of coal. Twelve percent of plenty is still a little too much, though.

This is where a moon filter comes in, which is simply a pair of very precise sunglasses for your telescope. To put this another way, most moon filters are neutral-density: they reduce all wavelengths of light to the same extent.

Neutral-density filters can also be used to clarify views of deep-space objects like double stars. While a body such as Sirius appears as a single point of light when viewed too brightly, cutting down the amount of light in the eyepiece makes both of its components visible:

You can achieve much the same thing by placing a stop-down mask over the front end of your telescope to reduce its effective aperture. These are available for most reflector telescopes, but you can also gimmick one up yourself using some cardboard and a little sticky tape.

Staring at the Sun, Safely

Mercury or Venus passing between us and the sun, and of course solar eclipses, are events penciled into many amateur astronomers’ calenders. Hopefully, all of them are also aware that peering at the sun is a really bad idea, and this goes double when looking through a telescope.

If the reasons for this aren’t clear, watch the following video (unless the sight of dead animal parts makes you queasy, in which case you should just take our word for it):

Should you wish to observe sunspots or the solar corona, your only options are to browse Pinterest or use a sun filter. These go on the front end of the telescope and should reduce the amount of incoming light to only about 0.00001%. Cheaper solar filters made to fit on the eyepiece have been known to shatter due to the intense heat they’re exposed to, suddenly releasing a laser-like beam of light directly into your cornea: 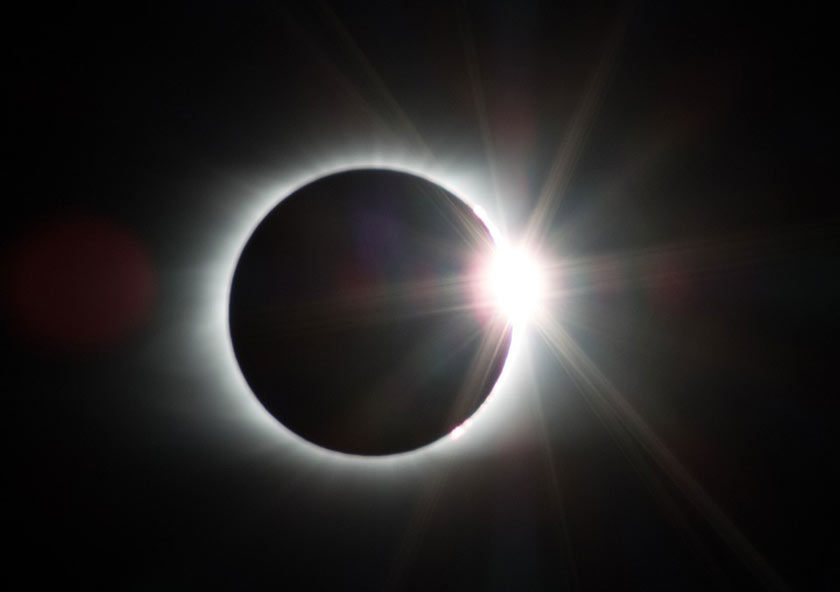 No matter how keen you are on saving money, this is one instance in which you should make sure you’re getting a quality product. Under no circumstances try to go the DIY route if you’re interested in solar observations.

Death, taxes, and light pollution are things with which every astronomer has to deal with. Luckily, there is something you can do about the latter:

Most terrestrial light sources are of the mercury vapor, sodium, fluorescent, or incandescent varieties. This means that their wavelengths are predictable, and filters are available to block these out for the most part. Such filters are typically referred to as broadband, since they attenuate a wide range of colors associated with city lights. Ultra-high contrast (UHC) filters work on a similar principle, but are designed specifically to cut off the wavelengths emitted by streetlights.

Narrowband or line filters, on the other hand, cut out all aspects of the sky glow except the emission lines of certain types of atoms. These “lines” refer to the colors produced (or absorbed) when an atom experiences a change in its quantum state, and each element has a well-defined series of precise wavelengths which identify it uniquely:

This makes narrowband filters capable of displaying certain nebulae in stunning detail – only the light originating from the object itself is allowed through.

The most useful types of narrowband filters are hydrogen-alpha, hydrogen-beta, and oxygen-III, named after which spectral lines they’re designed to pass.

“Nebula” filters generally let through all light between the O-III and H-β lines – if you’re going to buy only one filter in your life, this should be it. This will allow you to see many celestial objects clearly against a dark background, making it possible to discern a huge amount of detail.

A Trick of the Light

Successful skygazing is about more than picking a bright day and pointing your telescope in the right direction, and rewarding observation takes more than simply peering at the right star. This means working with the eye’s natural mechanisms.

Aside from movement, we’re best equipped to notice contrast. While they can’t actually make objects brighter, filters do increase contrast, making it possible to spot the invisible and catch fine features on what would otherwise remain indistinct.

How Speakers Work, and What Makes them Good