The Best Way to a Brighter Smile?

Here's the Low-Down on Teeth Whitening

Think fast: what is the first thing you notice when meeting someone for the first time?

Chances are that you can’t answer easily, since a first impression is always a gestalt rather than a list of individual features.

We’re not, after all, compiling a description to give to the police; instead, it is more of a general feeling we get when we see a new face. However objective we try to be, we’ll remember that feeling and may even end up treating a person unfairly because of the way they look.

The Best Way to Stand Out from the Crowd

For many people, the only kind of first impression that matters is someone’s apparent net worth, so they will judge you on everything from the quality of your shoes to your haircut.

In other cases, especially when romance is a possibility, it is important to establish whether a potential partner has enough self-respect to take care of themselves.

Particularly in men, good grooming and dressing is only one third of the attraction; the rest of the effect being made up of the confidence, dignity, and attentiveness to detail this care demonstrates.

Something which everyone in the world looks for, though, are the signs of good or poor health. This is mostly subconscious but totally universal, and affects our perception of a person to an unbelievable degree.

If you want to know which politicians newspapers don’t like, just see whose published photos make them look pale or hunched over. People genuinely and instinctively respond to this kind of thing; people with a fit and vigorous appearance are simply far more likely to be listened to at work, make new friends, and find love.

It’s very difficult to add to this impression of vitality without going over the top. It’s better to instead avoid obvious failings like greasy hair, smelling bad, and, of course, stained teeth. Not being perfect is rarely a problem, but something like a discolored grin can easily cause a feeling of revulsion in everyone you encounter.

About a fifth of people admit to being so insecure about their dentition that they will actually hide their teeth whenever they’re being photographed.

In modern-day culture, being bald or overweight is still acceptable, but having bad teeth is actually seen as a kind of personal vice. This is exactly why people pay for things like bridgework and teeth whitening. But which types of the latter are most effective and, very importantly, safe to try?

The Absolute Best Way to Whiten Teeth: An Ounce of Prevention

If you believe the advertising, everything from hemorrhoids to divorce is supposed to be instantly and painlessly fixable. This may be “as seen on TV”, but it’s not realistic in most cases. It may be hard to swallow, but your waistline, your complexion, and even the state of your teeth are all the results of the choices you make on a daily basis.

Teeth whitening treatments can indeed help to repair the damage caused by generally poor oral hygiene. If you take care of your dental health in general, though, these might never be needed, or you could get by with using a much gentler method.

If you are still smoking for some reason, you should definitely consider quitting, which is actually not that difficult when approached with the proper mental attitude. Giving up tea and coffee is much harder, but you can keep these from staining your teeth by drinking more water and brushing several times a day.

Less obvious but still undeniable is the effect your dietary choices have on your gums, enamel, and, certainly, the appearance of your teeth. Eating less sugary and acidic foods is sure to yield results, while you can even buy supplements specially formulated to strengthen and whiten your teeth.

Even assuming that you’ve committed to taking better care of your teeth in future, you might not be willing to wait anywhere between weeks and months before you start seeing results. You don’t, however, need to reach for anything you can’t pronounce just yet; let’s try a few home cures first:

The Next Step: Harsher Ways to Whiten Teeth

When it comes to teeth whitening options, there is often a trade-off between short-term efficacy and long-term effectiveness. Why this is true is easy to understand when you know what a tooth looks like on the inside: 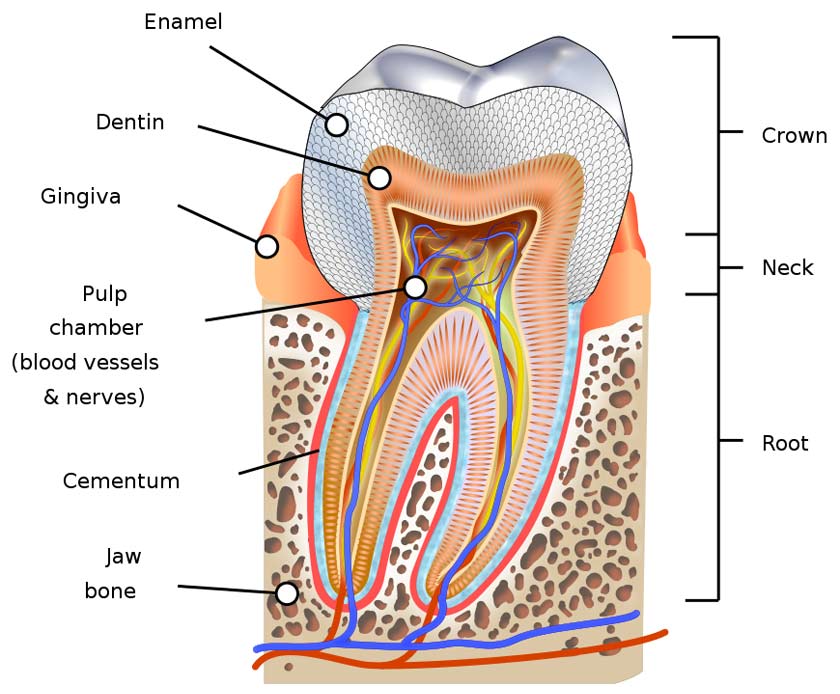 Now, there are basically two ways in which a tooth can appear discolored.

In the first case, substances like nicotine and the tannin in red wine can stick to the outside of the teeth, a process which is greatly facilitated by the presence of plaque. Unfortunately, many treatments for removing these stains also damage the tooth’s natural enamel, allowing the yellow-brownish dentin to show through from the inside.

This means that insisting on immediate results will often mean having worse problems later. In some cases, people have damaged their teeth permanently by over-using riskier types of teeth whitening treatments, even to the point of requiring multiple root canals or expensive veneers.

With this in mind, it’s always a good idea to work with the lightest touch that will get the job done, and improve your teeth’s appearance by lifestyle choices instead of chemicals whenever possible. Most of us are willing to go to this much trouble when it comes to our backs – is your only set of adult teeth worth any less?

Of course, it will still be necessary to take a more active approach to teeth whitening from time to time. If you have an important job interview, television appearance, or wedding in your future, it’s perfectly appropriate to do whatever you can to look your best.

The key thing to remember, however, is that this kind of intervention should be seen as shock therapy, not part of your normal beauty routine. As long as you stick with this attitude, most over-the-counter teeth whitening options are safe to use, assuming that your teeth are generally healthy to begin with.

Toothpaste, no matter what is printed on the box, only has three real jobs:

Whitening toothpastes are basically just better at the last part. In theory, they should remove superficial stains during regular use without damaging the enamel, although your brushing technique and the kind of toothbrush you use also play a role. Do not, however, expect results overnight.

Most of us know by now that antioxidants, whatever they are, are good for you. Well, hydrogen peroxide (H2O2) is literally the opposite of an antioxidant, and in its pure form can be used to launch rockets.

This isn’t meant to scare you, but you should realize that being irresponsible with it will have consequences. As long as you buy a product which is formulated for dental use, only rarely apply it to your teeth, don’t swallow it, and keep it out of your eyes, you should be fine.

Baking soda (sodium bicarbonate, NaHCO3), on the other hand, is a fairly mild chemical which acts as an abrasive powder, helping to remove plaque and other deposits from dental enamel. Used together, these substances strip away surface stains while also lightening the dentin inside your teeth.

To use, simply combine two parts hydrogen peroxide with one part baking soda and enough water to form a smooth paste. Use this to brush normally once or twice a week, rinsing very thoroughly afterward, until the worst blemishes have faded.

If what you really need is a rapid improvement in appearance, home bleaching supplies are probably your best option. These are relatively cheap and effective, and usually safe when used as directed. 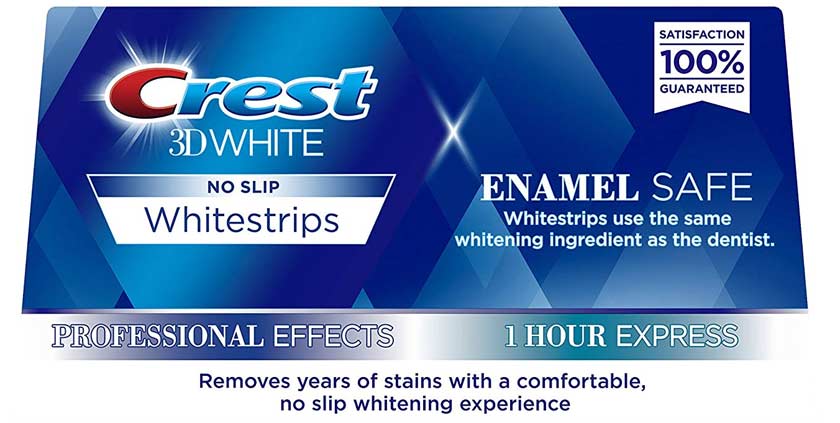 Their action is entirely chemical, and the ingredients home treatment kits contain would normally only be used externally. If you over-use them, you’re likely to develop dental problems at some point in the future, while swallowing even a small amount of the mixture will often cause nausea or worse.

Most of these products are formulated around hydrogen peroxide, acids, or other bleaching agents. The only difference among them lies in how they are applied.

The cheaper strips are supposed to adhere and mold themselves to your teeth’s front surface, but often don’t cover the entire area or sit that well on uneven portions. In particular, you might find that the flat parts are lightened while the crevices between your teeth remain stained, actually leaving your teeth looking worse than before.

Dental trays avoid this problem while still keeping the caustic gel away from your sensitive soft tissues. These can be ordered online or custom-made by your dentist, with the custom-made ones obviously being safer and more comfortable.

As mentioned, dental discoloration may be the result of either stains on the teeth’s surface or the yellow dentin showing through the enamel. Regular professional cleaning by an oral hygienist can’t do much about the latter, but will often put paid to superficial stains while also avoiding many other kinds of dental problems.

Getting a good electric toothbrush and regular checkups also has another advantage: tooth blemishes are often caused by or associated with other dental conditions, and preventing or treating these is obviously in your best interest. In fact, attempting whitening treatments when your gums are not healthy is likely to be ineffective, harmful, or both.

Getting What You Pay For

In some cases, it really is worthwhile to get a professional’s opinion, and certainly where your health and well-being is at stake. If you’re at all concerned about possible complications, or a DIY teeth whitening kit hasn’t worked out for you, talking to a qualified dentist is highly recommended.

If you really have to get ready for some event in a hurry, this is also your best bet. Dentists that offer bleaching services have access to specialized equipment and chemicals, as well as the training needed to use these safely. The main drawback here is the price – a single session will most likely cost at least $600 and, as this is a purely cosmetic procedure, it will not be covered by insurance.

There is some reason for caution here, unfortunately.

Teeth whitening supposedly churns over almost $15 billion per year, and not everyone trying to cash in has actually finished dental school. Anyone who can’t show you a diploma, or who makes bold claims without balancing them with caveats, should be avoided. In particular, any teeth whitening regimen that relies on light of whatever kind is probably a scam. There’s virtually no evidence that it helps in any way, while the associated risks are significant.

How to Protect your Hair from Too Much Heat

All The Stuff takes over Oomphed.com

How to Get a Close Shave with an Electric Razor