The Nuts and Bolts

The first thing I should tell you is that I have no children of my own. That doesn’t mean that I dislike them or don’t understand the anxiety parents feel, especially about their younger offspring.

Almost all of the people I’ve worked with, and most of my friends, can hardly go five minutes without mentioning their kids. They’re often either boasting or worried, and either usually seems justified.

So, I can’t tell you how to raise kids.
Anyone who says they can is probably a little over-confident in their abilities, anyway.

What I can help you with, though, is a thorough yet brief overview of the technology involved in night-vision baby monitors, backed by over a decade of testing, installing, and managing CCTV systems on three continents.

Before Anything Else, Define Your Goals

It’s my belief that I should first explain something about goals and security, but I understand that some of you come here to learn about night-vision only. If that’s you, you can skip to What Makes a Baby Monitor “Night-Vision” Capable?.

Where a lot of CCTV implementations fail (and a night vision baby monitor is a CCTV system, in my book) is through a lack of understanding of business processes, criminology, and risk management.

You probably don’t think of these as things that apply to your daughter’s bedroom, and for the most part, you’re probably right. However, thinking in these terms does provide a useful framework for examining whether you need a baby monitor and how you should use the night vision mode.

For the most part, baby monitors are seen as safety precautions, not security appliances. Still, depending on your goals, it’s good to know more about this.

The first thing you need to know is that a camera, by itself, is not “a good thing in general”.

One of the best examples of this is the city of London, in which there are half a million CCTV cameras, about 16,000 of them in the subway system alone. Okay, the British capital isn’t the worst place in the world, but muggings, sexual assaults, and other crimes do happen.

Does a camera prevent these?

No, a machine can’t (as yet) climb down from a pole and beat up a crook, although it can cause a slight deterrence in certain types of crime.

Does a camera at least ensure that the perpetrators get caught?

This is mostly due to police failing to request footage from privately-owned cameras, through poor procedures, and because of “evidence” that turns out to be either irrelevant or unusable in court.

The exception to this is murder and other serious crimes (95% of Scotland Yard murder cases include CCTV evidence), which proves that video monitoring can be effective, but only if it’s implemented correctly.

How to Choose a Night-Vision Baby Monitor

Baby monitors are hugely popular. As their prices drop and their capabilities increase, they are expected to become even more so: 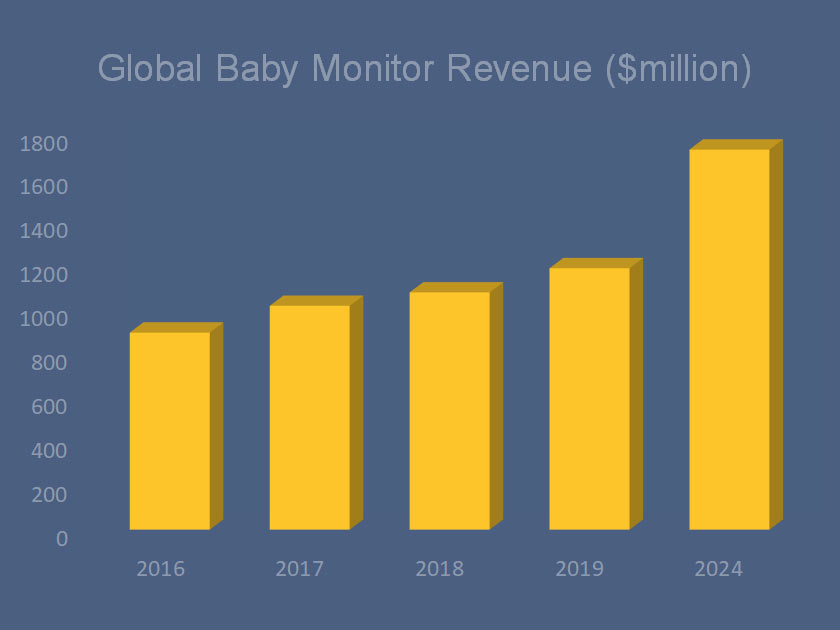 The primary thing most parents want from their baby monitor is a device that, so to speak, keeps an eye on their child. An audio-only monitor will alert you when she’s crying, which is certainly useful. If it has a two-way talk function, as most now do, you can also talk to her, either to comfort her when she’s upset or just to keep her company.

Considering how cheap these devices have become, adding video to the mix seems like a pretty good idea. When you look in on the children, for instance, you’ll be able to tell whether they’re quiet because they’re drawing peacefully or because they’re eating the crayons.

In other words, while an audio monitor allows you to leave the room your baby’s sleeping in, a video monitor is a much better option for parents who work at home. For technical reasons described below, most devices with video are also night-vision baby monitors, which means you won’t need to get out of bed in the middle of the night as often.

Going one step further, some advanced monitors allow you to access the video feed on your phone wherever you are, or record what they see.

These extras give you some peace of mind, but as long as you leave your children in the hands of trusted babysitters when you go out, you probably don’t need them. On the other hand, incidents of abuse do happen, which is why many daycare centers are now fitted with CCTV cameras.

The above might seem tediously obvious, but let me reiterate: the majority of blunders in the CCTV world happen not because the technology doesn’t work, but because it was selected or applied incorrectly. Usually, this is because nobody stopped to think about what their system was actually supposed to do.

Now that this point has been covered, we can move on to what you’re probably here for: the technical explanations.

There is some confusion about the difference between “infra-red”, “day/night”, and “night vision” cameras. This is understandable, especially since many manufacturers make specious claims. They’re probably hoping that a site like this won’t actually review their products….

When you dig down through the marketing, though, almost all electronic cameras are infra-red at heart. A CMOS or CCD sensor doesn’t care much about the wavelength of a photon that hits it (although night vision video is always in black and white).

In fact, you can turn almost any webcam into an infra-red camera with a little bit of hacking. Night vision capability really isn’t all that impressive.

This actually involves nothing more than removing the IR filter, which night vision cameras do automatically when the light level gets too low.

Dedicated day/night cameras, which you would not typically find in a night vision baby monitor, have a few extra tweaks. For one thing, infra-red and visible light refract slightly differently, so their lenses are specially coated to remain in focus regardless of lighting. Their DSP (Digital Signal Processing) microchips and embedded software are also optimized to process IR video.

You don’t need to worry about most of those terms if you’re only buying a night vision baby monitor.

One thing worth mentioning, though, is “gain”, also called “automatic brightness adjust” as well as a few other things. It sounds like a good thing when you first hear it, but the harder you drive electronic components, the more noise you get.

This noise shows up as “snow” when we’re talking about video signals, which is often the most evident sign that a “night-vision” baby monitor doesn’t really work in total darkness or very low light levels.

More on this a little further down.

Seeing in a Dark Room

The more clearly you can see your child on screen, the more useful the video aspect of your night vision baby monitor will be.

Since you’re probably reading this on a computer, there’s no need to talk about things like resolution and frame rate, which you’ll already be familiar with. Instead, we’ll cover a couple of points relating specifically to seeing in the dark.

In terms of picture quality, we should remember that night vision cameras require ambient infra-red light to function. True thermal cameras detect the heat radiated by warm objects such as a human body, and cost a great deal more than most people will be willing to pay for a night vision baby monitor. The only real applications for these are scientific and military.

Instead, many baby monitors contain a thermometer, which doesn’t tell you exactly how hot or cold your baby is, but will warn you if you’ve left a window open or forgotten to turn down the radiator.

Because they detect only reflected IR light, not radiated, most night vision cameras have infra-red LEDs to provide illumination.

These aren’t all equally powerful, however. The less light they emit and the further they are from the point you want to observe, the worse your picture quality will be. Electronic gain, mentioned above, can be used to compensate for under-powered LEDs or inferior sensors, but only up to a point:

Unfortunately, even in the professional CCTV world, there’s no single standard for describing a camera’s low-light performance. Two manufacturers might sell virtually identical products, with one claiming an effective viewing distance of 16 feet and the other 20 feet.

If you need to mount your baby monitor some distance from the crib, the best plan is perhaps to search online for pictures the camera produces in actual use.

Since the number of pixels it can use is limited, a camera can either look at a small area in detail or a larger one more generally. This is called field of view and is expressed in degrees.

To determine the field of view you need, measure the width of the space you need to watch (y), the distance to where you plan to mount the monitor(x), and calculate tan(y/x) on a spreadsheet or calculator.

Unfortunately, not many manufacturers publish their baby monitors’ FoV, although they will generally tell you if you ask.

Some, like the Infant Optics DXR-8, can use either wide-angle or close-up lenses, which takes much of the guesswork out of installing it.

In case the above explanation wasn’t totally clear, field of view basically means the zoom of the camera. For most night-vision baby monitors this is fixed, but some allow you to control it remotely. This naturally solves most of your FoV problems, as does the camera’s ability to pan (move from side to side) and tilt (shift up and down). This means that you can potentially view every part of a room while retaining the ability to zoom in to your baby.

There is a caveat to this, though: digital zoom, pan, and tilt don’t actually move the camera, but instead, just change which pixels of the image sensor are displayed. This is cheaper, but also much less effective.

Also, even if a company claims that their camera can pan, they may in fact mean that you have to physically do this yourself instead of using remote control.

To Record or Not to Record?

Most night-vision baby monitors don’t have a recording feature, although a couple of high-end models do have a slot for an SD card or the option to store video on your phone or computer.

This leads us to the most important point of all: you have to actually review stored footage or it’s not all that useful. The problem is that video takes a great deal of time to go through.

If you have doubts about how your baby is being treated while you’re away, it might be worth at least doing spot checks. Depending on where you live, you might also have to inform babysitters that they may be recorded.

Luckily, people tend to behave much better while they’re on camera, and this reassurance by itself might make it worthwhile to buy a model that can store video.

The Growing Importance of Paper Shredding