Xeriscaping
More than just Sticking a Cactus in the Ground
All The Stuff is reader-supported. When you buy through links on our site, we may earn an affiliate commission (learn more).

Fresh, unpolluted water is a limited resource. Droughts and shortages are already commonplace, and the situation is only likely to worsen in coming years. With about half of domestic water consumption going to irrigation, the planet and your neighbors will thank you for any savings you can make here.

While the threat of water restrictions is bad news for gardeners who’ve spent years establishing some types of traditional garden, there’s no need to hang up your pruning shears just yet. Nor, in fact, do you have to restrict yourself to planting nothing but rocks and weeds. With a little forethought, it’s actually pretty easy to lay out a prize-winning garden that can thrive with little to no watering.

The Pros and Cons of Going Dry

There are, of course, some trade-offs to be made. If you’ve promised your significant other a thousand lillies every summer, you’re simply going to have to irrigate accordingly. Drought-resistant plants also tend to grow more slowly, so you might have to plan in terms of years rather than seasons.

The flip side of this is that xeriscaping – maintaining a garden using as little irrigation water as possible – often takes less effort than more conventional approaches. Even better, you don’t need to sacrifice anything in terms of appearance: a low-irrigation garden doesn’t have to look sparse or dry. There’s a treasure chest of groundcovers, flowering plants, and even vegetables for you to choose from, while a number of water-saving strategies will help you get the most from however much or little water you have available.

It will come as no surprise that a xeriscaping garden starts with choosing plant species that allow you to reduce the watering of your garden. Most plant retailers will make it clear for which areas the various plants they sell are best suited.

Even if you’re not a very experienced gardener, it’s simple to find out in which USDA plant hardiness zone you’re living. Here’s a map to get a first idea: 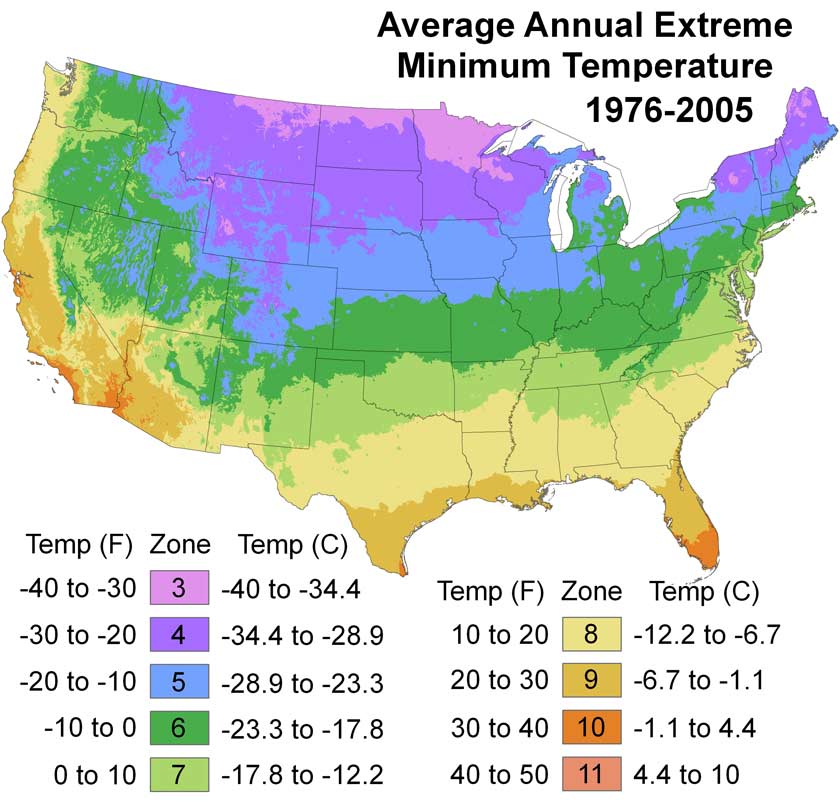 You might also want to get a more precise idea of how much rain your yard typically receives from one month to the next. These numbers (which obviously vary seasonally) are less easy to link to particular plant types, but will still be useful to know.

The Benefits of Choosing Indigenous Species

Ornamental plants that have been resettled from other regions or even continents aren’t necessarily adapted to your local conditions. At best, they’ll require constant attention; at worst, they might like their new environment way too much and become an invasive species.

Plants that naturally grow wild around your house, on the other hand, come with built-in resistance to local diseases, only need occasional watering (if that), and will be enormously grateful for absolutely any additional pampering they get. There’s a good chance that your closest botanical garden sells seedlings or can tell you where to get them, often for less than you’d spend on fancier but more fragile plants.

Here’s a short selection of native plants for different areas of the United States:

Other Edible and Decorative Choices

While we hope you’re impressed with some of the species native to North America listed above, the basic fact is that not all are nearly as pretty. This needn’t be a problem, though: unless you live in an actual desert, you don’t need to have a single aloe in your yard. In fact, once you do your research, the water-conscious gardener is spoiled for choice when it comes to attractive ground covers, shrubs and trees, flowering plants, and even vegetables.

Quinoa, the darling of the health-food crowd, produces some surprisingly beautiful flowers (harvesting your own will probably not be worth the effort, though). The same applies to sunflowers, which also tolerate drought well once they’re past the seedling stage.

Speaking of things you can eat, spinach, watermelons, and several types of bean require fairly little water. You’ll have to irrigate them from time to time, but not nearly as often as cucumbers, onions, or broccoli. When it comes to herbs, any relatively hard herb (rosemary, thyme, lavender, etc.) will thrive during long hot periods with only a minimum of effort on your part.

Bougainvilleas are almost impossible to kill, bloom as if they get paid for it, and love trellises. The only things they don’t like are frost and overwatering. If you’re looking for a ground cover instead, verbena does very well in hot climates and dry soil, and comes in more colors than you can shake a stick at.

Have a look at these:

There are basically four ways in which irrigation water is lost: evaporation, wind, runoff, and simple over-watering. The good news is that an automatic irrigation controller with weather sensing can greatly reduce the amount of waste, as can a few simple measures anyone can implement.

Looking at Alternatives to Lawns

A well-manicured lawn, to many, is a symbol of all that homeownership implies. Realistically, though, unless you often play host to your local frisbee club or have active children who need that top rated trampoline, having one is really pretty useless, not to mention boring to look at.

More importantly to those living in arid regions, grass generally needs twice as much water per square foot as the rest of your garden, probably making it your biggest household water-hogger. Along with the hassle of mowing and otherwise taking care of a lawn, it’s perfectly reasonable to decide that this particular boondoggle just isn’t worth it.

If you decide to buck the trend in this way, it’s worth considering any of the following:

The whole point of xeriscaping is that how good your garden looks doesn’t depend just on how much water you pour into it. This has been proven numerous times in practice; along with choosing the right kinds of plants, knowing how, when, and how much to water them makes apparent miracles possible. Unless you’re suffering a catastrophic drought, there’s no reason to settle for this:

To achieve something similar, think about this:

Mulching is another way to conserve irrigation water, but it’s so crucial to the xeriscaping system that it deserves its own section. It implies nothing more than spreading organic matter around your garden and layering it an inch or three deep.

You can use straw, compost, wood chips, or anything that doesn’t have weed seeds in it. Doing this has a number of benefits, some of which may surprise you:

As you’ll no doubt have realized, a big part of xeriscaping is understanding the difference between how much water you spray onto your garden and how much of it is actually available at the plants’ roots. Assuming that none of it blows away or evaporates by the action of the wind and sun, you may still be wasting more than you think by allowing it to sink into the water table.

Different types of soil can hold different amounts of water, usually expressed in inches of rain per vertical foot of earth:

Looking at these figures, it’s clear that watering a lot at a time does not necessarily mean that you can water less often. If your plants have a root zone of 6″ deep and they’re planted in relatively poor soil, they might end up with only a fraction of an inch available to them after an hour or two of rain, no matter how much actually fell on them.

Stripmine My Garden? No Thanks!

The ideal way to rectify this situation is to dig up your entire property, mix it with organic matter as well as either silt or fine sand to improve the texture, and restart gardening from step zero. This will allow your new plants to utilize more of the water they receive, but it’s obviously not practical in most cases.

If you don’t want trucks filled with surprisingly expensive dirt tearing up your driveway, you do have a few options that involve nothing more than a gardening fork and maybe a plough. Since we aren’t planning to add enough earth to change your yard’s soil structure completely, let’s instead talk about a few additives that will help your garden retain moisture, drain adequately when saturated, and improve aeration.

Organic matter will be the first choice for many dedicated gardeners. It’s very effective at loosening up soil and storing water while also being a source of plant food, but we have to make a distinction between compost and something like hay or manure.

Other forms of organic matter do, of course, turn into compost eventually, but not in a controlled way. Weed seeds, for instance, won’t get destroyed, and a lot of nutritional value will get lost along the way. Compost made in a well-managed heap has neither of these problems and really doesn’t cost much. Significantly, it also contains a ton of helpful microorganisms that will continue to fix atmospheric nitrogen where your plants can get to it, produce organic nutrients, and make it more difficult for disease-causing germs to gain a foothold.

Vermiculite has several of the benefits of organic matter, but is in fact a porous mineral that happens to be very efficient at storing water and creating air channels. It contains no plant nutrients, but also is inert and non-toxic.

Gardeners sometimes mix it with soil at as high a ratio as 1-to-1, especially for potting mixtures. Unlike compost, it never decays, and its exceptional water-holding abilities make it a great tool for growing seedlings.

Synthetic water absorbers, which are available either as plastic beads or gels that expand when wet, were originally designed to make small-scale agriculture possible in dry parts of the world where reliable irrigation is simply not available.

Although neither type is as effective as compost or vermiculite at improving soil structure, synthetics do help, and their ability to store water is exceptional. Recommended application rates are rarely over 1 part in 200, after which these “hydrogels” can keep on working for years. Many people, ranging from large-scale farmers to people with a couple of flowerpots, have reported excellent results. Others, however, are concerned about the possible health effects of these chemicals, while it seems that soluble fertilizers may be able to render hydrogels ineffective.

Once you’ve worked some of these materials into the soil, leave it alone as much as possible. Preserving the soil structure using a minimal tillage approach is a common way of improving land’s water-holding capacity in the agricultural sector, and people whose livelihoods depend on getting the greatest yields using the least amount of irrigation generally know what they’re talking about.

A Gardening Philosophy with More than One Interpretation

A lot has been said regarding the benefits of xeriscaping on the natural environment. No doubt, we all have our part to do, but there’s no reason to simultaneously neglect the human environment in which we spend our daily lives.

Growing nothing but succulents is the only real option in some locations, but this isn’t necessarily the point of xeriscaping. Almost everyone, wherever they live, can use less water in their garden. The trick here is to do so without sacrificing beauty, and learning the fundamentals is what makes doing so possible.

The Basics of Weather Stations, and How they Work

Adding a Fertilizer Dispenser to Your Sprinkler System