How Clean Is Your House?

Should You be Doing More?

Germs – they’re everywhere. A single milliliter of “fresh” water might contain as many as a million bacteria, while even NASA’s clean rooms have (rather embarrassingly) been found to contain dozens of different microbe species.

One reason to keep the interior of a building clean is, of course, so that visitors won’t actually run away while holding their noses. Another is to ensure that you and your loved ones live in a healthy environment. To illustrate this, just take a look at how sanitary practices correlate with the health of children:

Especially if you run a business such as a hotel or restaurant, you might want to learn exactly how many bacteria are really around, particularly on surfaces where food is handled. Fortunately, there are many ways someone who has never seen the inside of a laboratory can go about this.

Testing kits usually take the form of strips or swabs, perhaps accompanied by vials or Petri dishes filled with special gels. Very detailed instructions are provided. If you’re willing to spend a little more, a handheld luminoscope can give you an idea of a surface’s level of contamination at a glance. Actually doing this in any kitchen is slightly alarming!

Yet, somehow, relatively few people actually get food poisoning. One reason for this is that bacteria only become dangerous above a certain concentration. Another is that, aside from high-precision laboratory equipment, most fluoroscopes and luminoscopes aren’t very discriminating in what kind of material they detect.

Before we go on, let’s not get overly squeamish about this subject. All germs are not bad; most of them don’t bother us at all and many are quite helpful. A certain class of viruses called phages, for instance, exclusively feed on bacteria and have actually been used in clinical applications.

Yogurt, wine, and vinegar wouldn’t exist without microorganisms, and in fact food of all kinds would have a lot less flavor without them. In agriculture, growing healthy plants is almost impossible in sterile soil. Industrial algae farms may one day play a huge part in fighting climate change, while microorganisms are also used in producing medicines. Our digestive and immune systems would be greatly weakened without microorganisms; in fact, they’re pretty much essential to our survival.

Your own cells in your own body are actually heavily outnumbered; much of you isn’t really “you”. Previous estimates went as high as by ten times, but more recently people connected to the Human Microbiome Project have said that a factor of three is more likely. A few of these species can make you sick if present over a certain level and some don’t really matter one way or another, but others do things like:

It should be said that some of these normally helpful organisms can also turn nasty if there are too many of them, which usually happens when some other factor weakens a person’s immune system.

The Germs to Really Watch Out For

As you can see, although some are lethal not all germs are even mildly harmful. The problem is that most tests you can perform as a non-scientist don’t distinguish between good and bad microbes, at least not very accurately. On the other hand, these still provide a good indication, as a truly clean surface will show low concentrations of both. This may not be wholly beneficial, though – reduced exposure to germs in childhood can lead to a weaker immune system and allergies later in life.

In any case, microbes rarely go away by themselves. Bacteria and viruses can stay alive on bare surfaces for a period ranging from a few minutes to several years. Even if they don’t have access to sustenance or moisture, many species will enter a dormant state, ready to go into action as soon as conditions are more favorable. This is why all of us should be at least a little afraid of species like E. coli, streptococcus, listeria, MRSA, norovirus, and salmonella.

For some people, this surface, even though it’s one of the largest in any house, just needs to look reasonably clean. If children are present, though, this really isn’t enough.

As is often the case with cleaning, the trick is to clean frequently enough to prevent dirt from turning into grime. A vacuum can help with this; not by actually sterilizing the floor but by removing minuscule pieces of debris that microbes and dust mites would otherwise feed on (they’re also great fun to have if you own a cat). Dust mites are present in every home, feeding especially on discarded skin cells. Less than a millimeter long, they are a major contributing factor to allergies.

When vacuuming by hand, don’t move the suction head too fast – a little time is required for it to really remove dirt from between the fibers. How often this should be done varies depending on foot traffic, but once a week should be regarded as a minimum. Still, however often and thoroughly you vacuum, dust and other contaminants will inevitably keep building up, so paying a professional to steam-clean your carpets every 12 to 24 months is essential – this may even be required by your carpet’s warranty. Finally, not allowing shoes in the house automatically keeps floors much, much cleaner.

You probably think of air pollution as something that happens in the atmosphere at large. Actually, it may be much more harmful to breathe inside your home than out; indoor air quality readings can be up to ten times worse than those taken immediately outside. One reason for this is that it often resembles a sealed capsule – once inside, contaminants don’t have anywhere else to go when adequate ventilation isn’t provided.

One of the major determinants of how many viruses, fungal spores, and bacteria are floating through the air is simply how clean your walls, curtains, and other surfaces are. Air circulates all the time, and allergens and microbes often catch a ride on any dust particles dislodged by drafts.

Obviously, frequent and thorough cleaning is the first line of defense against things becoming unsanitary. Beyond this, however, a little extra effort and money may just be necessary, particularly if you have asthma.

If you buy an air purifier or similar device, make sure it has some mechanism for killing airborne microbes instead of just trapping and later releasing them. Some use ultraviolet lamps and others have HEPA filters, but in either case you should follow the manufacturer’s cleaning instructions. Exactly the same advice applies to vacuum cleaners of any type.

Worth a special mention in this regard is black mold (specifically stachybotrys, as not all molds that are black are as virulent). Although ignored by the medical profession until relatively recently, prolonged exposure to this can cause extremely severe health problems. In fact, if any area in your house smells musty, you have mold. It’s highly advisable that you get a professional in to take care of the infestation, as the laundry list of symptoms it provokes ranges from respiratory difficulties to psychological effects. Depending on your local humidity, it might be advisable to purchase a dehumidifier to make conditions less tolerable for all kinds of fungus.

It goes without saying that any surface that might be touched by food, even momentarily (the “five second rule” is a total myth), should be as clean as possible. Speaking of myths, many people believe that plastic cutting boards are superior to wood due to their porosity – actually, the exact opposite is true.

Whenever you cook, saucepans splatter the counters and walls, your garbage disposal throws up a cloud of invisible food particles, and tiny little spills accumulate. Bacterial colonies can grow amazingly fast when given the opportunity: 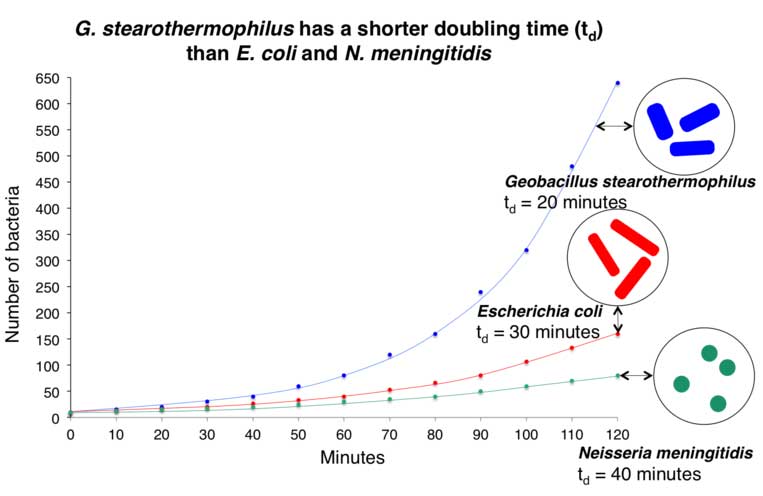 Knowing this, it’s obvious why experts recommend that all surfaces, and certainly all utensils, should at least be wiped down with detergent after every meal. Making a more thorough effort every week, where you take the time to clean under and behind appliances, is also not a bad idea.

If the kitchen is (as it should be) the cleanest room in any home, the bathroom might just be the dirtiest. Whenever you smell feces or urine, that means that airborne particles of you-know-what are entering your nasal passages.

These particles will also stick to walls, towels, toothbrushes, and whatever else is in the room. Anything that comes near your mouth should definitely be stored in the medicine cabinet, the toilet disinfected frequently, towels replaced, and the entire room scrubbed every week.

An extractor fan is actually not just a convenience, but helps you maintain your environment in a hygienic state.

All of us are constantly shedding dead skin cells – up to a third of a kilogram, or twelve ounces, per month. These, along with sweat and skin oils, provide food for microbes and dust mites.

If this situation gets out of hand, frequent, long-term contact with their colonies – such as eight hours per day – can easily lead to complications, especially allergy attacks, eczema, and various kinds of bacterial and fungal skin infections. Sheets and pajamas should therefore be washed about once a week, using hot water. Most mattresses can be fitted with a washable cover, which should be cleaned once a month.

* * *
The old saying “an ounce of prevention is worth a pound of cure” most definitely applies to cleaning your home regularly. Of course, owning even the cutest of gadgets or buying your cleaning products from the top shelf will never make this chore fun, but getting into a routine and keeping to it makes it a great deal easier. Once a year, too, you might want to make an entire day of it and get to all the nooks and crannies you normally ignore – most people manage to find the time: 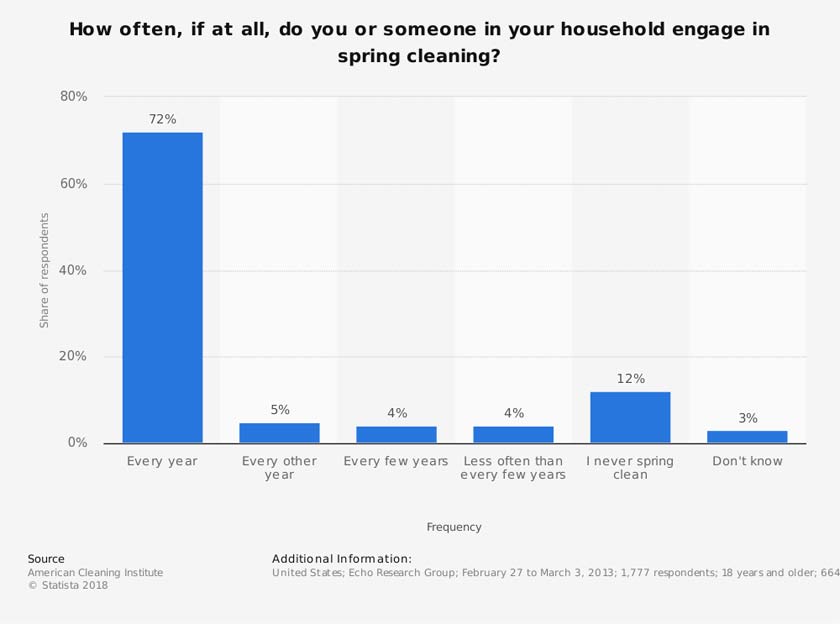 The Health Risks of Prolonged Sitting

How to Clean a Gas Grill