Italy, as a country, dates from only 1861. Before that, most regions were independent provinces centered on a large town or city (although these were often under foreign occupation). To this day, Italians from different parts of the country continue to cling to their separate identities and traditions.

These definitely include cooking styles; people from villages a couple of miles apart may have fierce arguments about how a certain dish should be prepared. And, as you would expect from the inhabitants of this peninsula, this is often accompanied by much shouting and gesturing.

The Italian Approach to Food

Despite these differences of opinion, which foreigners will typically find totally arcane, there is a shared philosophy of cooking permeating Italian culture.

In the first place, Italians consider family extremely important, along with quality leisure time. It’s far from uncommon for large groups to gather in a restaurant or someone’s home for a lavish dinner, while many people routinely interrupt their workday to have lunch at home.

They also, when it comes to ingredients, tend to value quality over quantity: a small but perfect coffee is much preferred over a “venti”, and most baristas will give you a funny look if you ask for one.

Similarly, it’s considered perfectly normal to splurge on the best cured meats, cheeses, and wines rather than buying inferior products in bulk. We must live, of course, but how much is a life without joy worth? This may explain why, despite a diet rich in carbs and fat, those living in Italy are significantly less obese than in economically similar countries.

From Farm to Fork

Most modern societies have completely lost track of where their food comes from, buying heavily processed junk in bags, boxes, and cans at a supermarket. Italy has not fallen totally into this trap: there, though supermarkets do indeed exist, a person is just as likely to look for a live eel at an open-air market than settle for frozen, breaded hake.

Flavor is sought out almost obsessively. Italy was quick to jump on the organic farming bandwagon and remains one of the highest-producing countries in Europe, along with Spain and France.

Freshness, too, is something Italians opt for whenever possible, which usually means that local produce is king. People near the shore eat fish, those in areas where grazing is plentiful will opt for beef instead, while those in tomato-growing regions do tomato-related things.

This is the key factor in the differences in the cooking styles of the various parts of Italy. In a sense, people used to eat what was most easily available and never bothered to change their habits too much once refrigeration and transportation became cheaper.

So, in other words, Italians take the view that good food and the enjoyment of it are crucial to one’s quality of life; this is self-evident, and nations that feel differently are obviously demenziale. Something so important is also worth feeling proud about, meaning that these following iconic dishes are venerated and treasured almost as much as the local football team.

The Regional Cooking of Italy

While there is no shortage of chain restaurants in Italy (often with English names!), you will have no trouble locating small, family-owned eateries that might have been in the same location for decades. Each typically sticks to using recipes that might not have been altered since they opened their doors – you will find no atrocities like “chicken alfredo” or “tomatoless bolognese” in any of them. 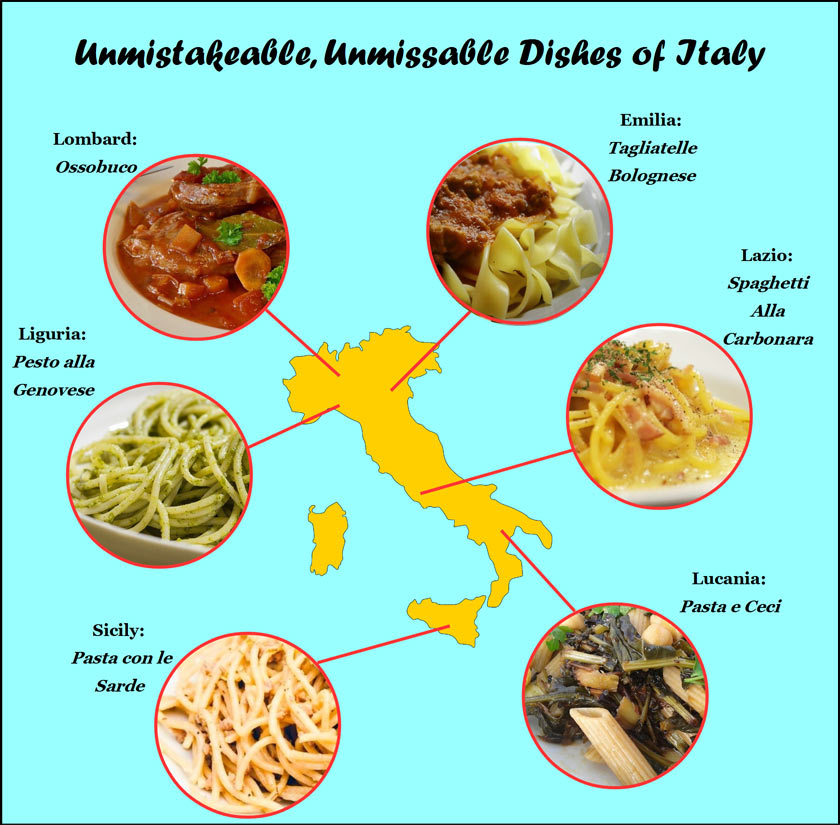 Here, however, are a couple of pasta dishes you should watch out for in different regions:

First off, tagliatelle and fettuccine are exactly the same thing but simply called by two different names in the North and South. Bologna, the capital of Emilia, lies about midway between Rome and Venice, so its inhabitants refer to it as tagliatelle. They will rarely stoop to serving their city’s signature sauce with spaghetti.

Many of Bologna’s classic dishes, in fact, consist of some sort of meat-and-pasta combination, with lasagna and tortellini en brodo both being worth a mention. The surrounding area comprises some of the most fertile farmland in Italy, which goes some way towards explaining why this region had such a huge effect on the whole peninsula’s culinary development in a historical sense.

Located between the heel and the toe of the Italian boot, Lucana cooking traditions were influenced by numerous Mediterranean cultures through the centuries. Despite these occasional visitors, the area is very mountainous, limiting opportunities for trade and agriculture. This led to Lucania’s relative poverty as well as its style of cooking, which can best be described as “doing the best with what you have”.

Ceci (garbanzo) is mainly grown in the sunny southern part of Italy and, among other things, is a good source of protein where there’s little space to raise animals. The ingredient list for pasta e ceci is literally in the name: any kind of pasta, chickpeas, garlic and olive oil are tossed together and served in a broth. Some tomato, herbs, and vegetables may be added, but this is an elaboration on the original recipe.

This is one instance in which “simple” doesn’t mean “stupid”: with no one ingredient overwhelming the flavors of the another, this is a very economical, nourishing, and satisfying meal.

Since pre-Latin times, cured pork has been an essential item in larders along the Tiber river. Long ago, this was sourced mainly from wild pigs, which lived in the forests surrounding Rome and fattened themselves on fallen acorns. Even gourmets won’t insist on being that authentic today.

The very best pork you can buy is called guanciale – dry-cured pork cheek (or neck). This ingredient – which is hard to come by even in other parts of Italy – is far more succulent and flavorful than bacon and forms the central part of spaghetti alla carbonara.

This, American heresies aside, is a recipe cream should stay well away from. Cooked spaghetti is simply tossed with fried guanciale slices, grated pecorino, black pepper, and raw egg. The egg warms but doesn’t quite cook, resulting in a perfect silky texture without the heaviness of extra fat.

Genoa and its environs lie on a narrow ribbon of land hemmed in by mountains on one side and the sea on the other. This leaves little room for farming, making seafood the anchor of many Ligurian dishes. What the region is best known for, however, is the invention of pesto.

Since the combined flavors of pine nuts, basil, garlic, cheese, and olive oil are really all you need, pesto is often tossed with freshly made linguine and served without any further embellishment.

Making your own pasta is easy, but there’s also bad news for home cooks. In order to make truly authentic pesto, you have to use fresh basil from Liguria itself, and, specifically, that grown in the hills of Pra. You’re also supposed to use a stone pestle and mortar, but really, who’ll know if you cheated?

Though very much part of modern Italy, the island of Sicily remains one of its most independent regions, even to the point of residents speaking their own dialect. They’re also not shy about going their own way in the kitchen: Sicilian cuisine is definitely unique, comprising an amazing repertoire of meat, seafood, vegetable, and dessert dishes.

While it would be insane to dismiss iconic dishes such as sweet cannoli, the most essentially Sicilian food has to be pasta con le sarde (pasta with sardines), along with its sister recipe – spaghetti ai ricci (made with sea urchins).

Unlike many Sicilian dishes, this does not take hours to prepare; minced sardines and anchovies are combined with fennel (which grows wild on the island), pine nuts, saffron and, crucially, raisins. Spaghetti, which probably originated in Sicily, is one possible complement, though bucatini is preferred.

The inhabitants of Northern Italy do enjoy pasta from time to time, but their preference by far is for risotto, polenta, and other grains. Given the colder climate, it’s probably no surprise that their favorite dishes tend to be on the heartier, meatier side.

The ossobuco you’ll find served in Milan is difficult to describe in a few words. Though the basic idea is to slowly braise veal shank (definitely including the bone and marrow) in white wine and stock, there are numerous steps along this long-winding way. Thankfully, there are numerous shortcuts us mere mortals can take to produce something similar, though not with the awe-inspiring flavor of the genuine article. Ossobuco is usually served alongside either polenta or risotto and topped with gremolata to cut the richness somewhat.

If you’re thinking of going on a food holiday to Italy, you should know that one week isn’t enough – one week in one town isn’t enough to experience everything on the menu, which you’ll almost certainly want to accomplish.

As with many ethnic cuisines, Italian restaurants abroad (however excellent some of them are) have to sometimes compromise their roots. The reasons for this range from customer tastes to the availability of raw ingredients to simple economics. Sometimes the dishes they end up serving are quite good, but if you want to eat real Italian food, you have little choice but to go to the true source. 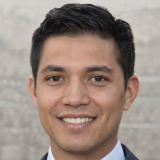 How to Fit Appliances in a Small Kitchen

The Good (and Bad) Health Effects of Coffee