In Just 2 or 3 Simple Steps

If you’ve followed our advice on this website so far, chances are that your garbage disposal is cheerfully zooming along 99.99% of the time. Of course, nothing is ever perfect, so the occasional jam will probably occur from time to time. Some of the better garbage disposals can usually deal with these themselves, but manual action may still be necessary now and then.

When this happens, you may be tempted to simply call a plumber and have someone else deal with the problem. The thing is, though, that most plumbers will admit that at least half of the jammed garbage disposals they see could have been handled perfectly well by even the least-technically-inclined adult. Yet, their rates for even simple repairs is almost enough to cover the purchase price of an entirely new machine.

Anyone who has a garbage disposal in their house should know about the simple procedures below, which can save a great deal of money and frustration. There’s no reason to leave this up to only the mommy and daddy of the family, although of course smaller children should keep well clear of garbage disposals.

The very first thing you need to do is to promise yourself that you won’t stick any extremity whatsoever down that deep, dark hole. Causing about a thousand emergency room visits per year, including those that happen when water and electricity combine in the wrong way, garbage disposals are far less dangerous than stovetops and, interestingly, candles. But really, why take the risk, especially if you’re tired or in a hurry?

On much the same note, you might end up switching the power on and off several times as you work through the process, and it’s rarely pleasant to realize that it’s on when you were sure it was off. This is even more true when your hands are wet. As someone who used to moonlight as an electrician, I still have an unholy but perfectly reasonable fear of this.

In fact, this is one reason I prefer garbage disposals that plug into an electrical outlet over hardwired models. If you have a hard-wired unit, you’ll probably have to turn the entire room’s supply off at the breaker panel. If you’re like me, you might even bribe one of your offspring to stand in front of it to stop anyone from turning it on again.

Although many people who don’t read manuals don’t know this, a garbage disposal automatically detects a stoppage and ceases working to prevent damaging itself. When this happens, it will seem totally dead, and your first thought might be that it’s time to look online for a replacement. In fact, it might only need to be reset manually, usually by pressing a small red button located on the bottom of the unit. 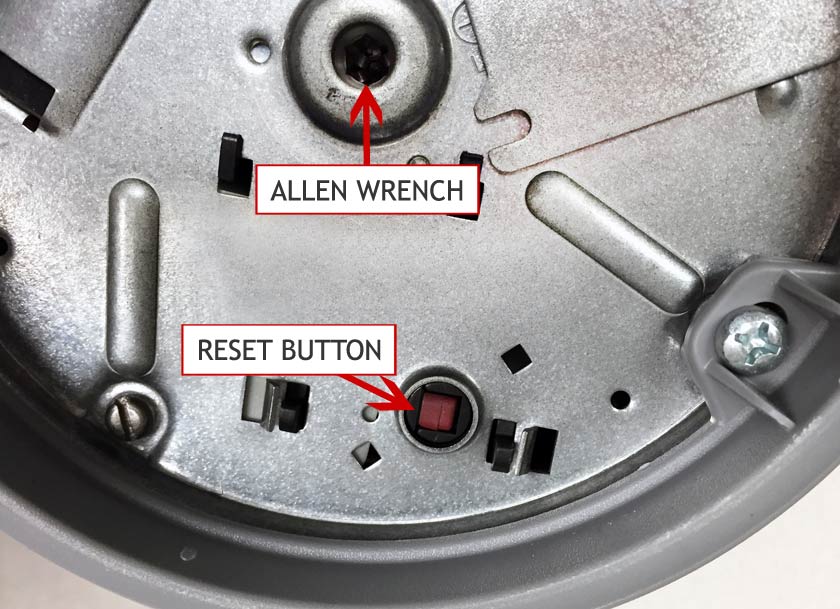 Before anything else, turn off the power. Then simply press the button. Wait a few minutes for the motor to cool down in case it has overheated; turn the power back on to see if it activates, then run some water through it to clear the problem. Fixing mechanical issues sometimes really is that simple.

The problem may also be with the electrical supply instead of the garbage disposal itself; this can easily be tested by plugging another appliance into the same socket to see if that works.

How to Repair a Humming Garbage Disposal

Electrical motors don’t typically start at their full torque, meaning that a garbage disposal that hums is usually trying to turn but can’t. It’s really not a good idea to leave it powered up in this case; you might end up burning it out.

Instead, turn off the power, grab an Allen wrench (usually ¼” size) and find the socket on the base of the unit. Insert the wrench and move it back and forth, using a little elbow grease if necessary, until it rotates relatively freely.

Don’t be afraid of causing any damage – as long as you’re using the manufacturer-supplied tool, it will bend before anything else does.

If you’re unable to do this, it might be time to take off the drain cover and try to fish out the blockage using a flashlight and pair of long-nosed pliers.

If this still doesn’t allow the Allen wrench to turn through a full 360 degrees, you might need to order a tool called a garbage disposal wrench that allows you to grip the grinding mechanism directly. But in case of emergency you can also use a broom handle, although this may end up warping something.

A good visual explanation is available in the video below, although the steps are in a slightly different order.

If you have tried all of the above and your garbage disposal still won’t go, it may still be possible to fix it. This will generally require opening it up and poking around. Unfortunately, if you don’t already know enough to do this, there’s very little a single blog article can tell you that will be helpful.

Generally, unless you have a warranty plan, the cost of a technician’s time will be comparable to the price of a new garbage disposal. These are often cheaper online, even if you opt for a more powerful model to avoid problems in the future. Also, you might be glad to know that you can install many kinds yourself, bringing the total cost down further. If you think this is the best way to go forward, be sure to check our reviews and best picks on this page.

Best Air Tools to Use With Your Compressor

Is an Air Compressor Really Worth It?