Counting Every Step you Take

How Many Steps Do You Need To Count?

Sports scientists and personal trainers actually disagree on a great many important things. Even so, most of them will tell you that if you want to burn fat fast, you should aim at either:

What, however, if you want to start exercising but you’re an older person, on the larger side or have a medical condition that prohibits intensive training?

Perhaps you’d like to change your routine to something a little healthier, but don’t yet feel like committing to a gym?

In this case, starting to walk more is most probably your best bet. This helps to get your blood pumping and burns calories while placing hardly any strain on your heart or joints. It can be incorporated into your everyday lifestyle easily, and best of all, needn’t cost you a cent to start with.

Still, if you plan to walk for exercise, you might want to invest in a pair of comfy sneakers and a fitness tracker sooner rather than later.

One Step at a Time

The pedometer (i.e. “step counter”) most fitness trackers contain will probably be the single most useful accessory for both dedicated and casual walkers. Others offer more advanced functionality, like the ability to challenge your friends to walk at least as many steps as you do every day – 10,000 is often recommended. 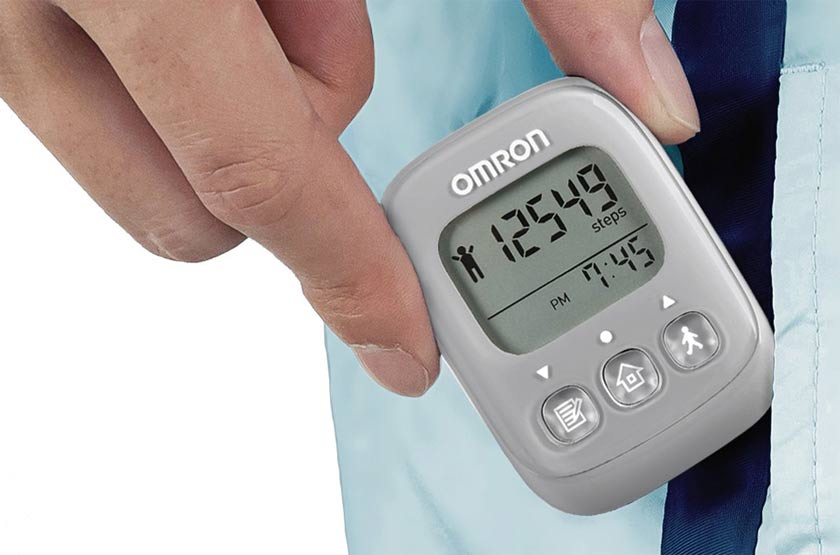 A basic pedometer without the features of a true fitness tracker. Can be bought here on Amazon.

What, however, is the story behind this supposedly magical figure of 10,000 steps?

Why not call it 5 miles or one and a half hours, both of which amount to more or less the same thing?

The truth here is that ten thousand steps per day is probably perfect for some people, but others can easily rack up more (and reap the benefits), while people starting from a place of limited fitness are better off taking it slow at first. If your ankles and feet are killing you, or you can barely keep your eyes open by the end of the day, there’s no good reason to strive for a goal that’s not yet for you.

10,000 is a nice, round number – which is great for marketing. As the “optimum” number of steps per day, it first made its appearance in the ’60s in the form of the manpo-kei device, which literally means “ten thousand step meter” in Japanese.

The manufacturer used this number extensively in its advertisements, and somehow 10,000 steps a day became the norm. This happened without any real scientific backing whatsoever – ten thousand is a reasonable, though rough, figure for average, healthy adults who do a limited amount of other exercise, but a very different number may be appropriate depending on somebody’s age and general health.

It’s easy to see why this sounds better in ads: 10,000 steps spread throughout the day however you like sounds quite achievable, at least with some practice. If you think of “5 miles” either as something you need to complete in one go or as 400 round trips to the office water cooler, it sounds impractical, while calling it “one to two hours of exercise every day” seems daunting.

Generally speaking, when starting to walk or run for exercise, your cardiovascular system (heart and lungs) is the first to improve. Soon after that, your leg muscles become stronger and more resilient. Ironically enough, this is when many people get injured and simply give up, forever – your joints and tendons take the longest of all to adapt and may get hurt.

The key to avoiding this is to start slow and build up your strength and endurance gradually.

If you normally drive to the store a few blocks away, try walking instead.

If you do have to drive, don’t spend 10 minutes circling the parking lot looking for the perfect space; just walk the fifty yards to the entrance.

Instead of calling a co-worker every time you have a question, get up and walk over to them.

Spend ten minutes before dinner exercising your dog, or do whatever suits you: these little efforts quickly add up.

Once you’ve gotten into this habit, you’ll probably find it easier to keep going. Try to find more opportunities for walking in daily life and try to incorporate some relaxing, invigorating hikes into your weekend. This is certainly far more enjoyable than getting sweaty and bored on an exercise bike!

Whatever you do, though, if you weren’t a very active person before, take the time to slide gently into this lifestyle.

Get comfortable on moderate slopes before you start tackling hills, take a rest day if you’re in pain, and don’t try to increase your average daily step count by more than perhaps 2,000 per week. Pushing yourself too hard will only be counterproductive.

More Tips to Help You Get Stepping

Once you’ve lost some weight and consistently hit ten thousand, five thousand or whatever daily stepping target you’ve set for yourself, you have some reason to feel proud. Not all people are capable of such a lifestyle change.

At this point, you may ask yourself what your final stepping goal should be.

The truth is that there’s no simple answer.

If you want to think of it in terms of calories, does a 200-pound man’s steps burn more energy than those of a 80-pound woman? Almost certainly, but there are a lot of other factors involved. Is walking fast up and down hills better for you than ambling around in the park? Again, yes (probably).

To give an upper and lower limit, the average person living in a developed country takes between 3,000 and 4,000 steps per day – anything less could be considered dangerously sedentary. People living in primitive societies often walk 15,000 or more.

The actual distance covered, how long you walk before resting and how quick your stride is all play a role in how much exercise this amounts to. How old and healthy you are determines the amount of exercise you actually need.

Given all this variation, don’t beat yourself up if you can’t manage as many steps per day as you “should” be able to. If you’re looking for a general guideline, though, the Sedentary Lifestyle Index developed by Professor Catrine Tudor-Locke is generally accepted as a good model: 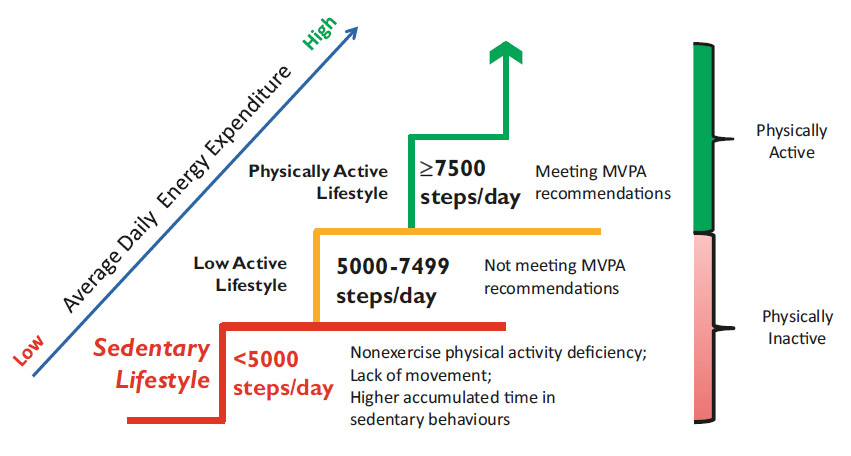 The MVPA recommendations referenced in the graph above are set out by the World Health Organization and can be found here. It roughly translates to:

The key point here is that taking fewer than about 6,000 steps per day certainly seems linked to health problems, while there are additional benefits to be found above that figure. In other words: doing anything at all to increase your step count is good, while doing more than you are now is almost always better.

In the end, though, your real goal should be getting healthier in general, not aiming for some number which may be totally wrong for you.

The best ways to see whether you’re getting fitter are probably to watch your waistline and check your heart rate from time to time. You might find that progress is slow, especially at first, but good results are absolutely guaranteed if you keep at it.

The Long and the Short of Standing Desk Ergonomics