How to Clean a Gas Grill

A good gas grill can represent a hefty investment. This is fine, though, since you generally get what you pay for. However, if you don’t take care of it, you will cause it to wear out much sooner, while also decreasing your grilling pleasure.

For the most part, this just means keeping your gas grill clean. On the other hand, many people don’t really like the idea of noxious chemicals coming anywhere near their food. Just think of how oven cleaner stinks!

Photo by: Your Best Digs

Fortunately, despite commercials that claim that The-One-And-Only-Magic-Grill-Spray is what you need, you can do a pretty good job using only natural ingredients. This turns out to be cheaper, better for the environment, and really not much more difficult.

We’ve all been there: you really meant to clean your gas grill after the last barbecue, but a nap somehow ambushed you and you haven’t thought about it since. Now, some friends are coming over soon, and you need a quick hack that will actually work.

The main problem, usually, is the burnt-on grease on the griddle itself, which does not look good at all and causes food to stick.

All you need to do is get the grill hot, then scrub it with half an onion, or a lemon half with the cut face dipped in salt. Between the scrubbing motion and the chemical reactions involved, your grill should be ready to use in no time – and the smell is by itself an appetizer. 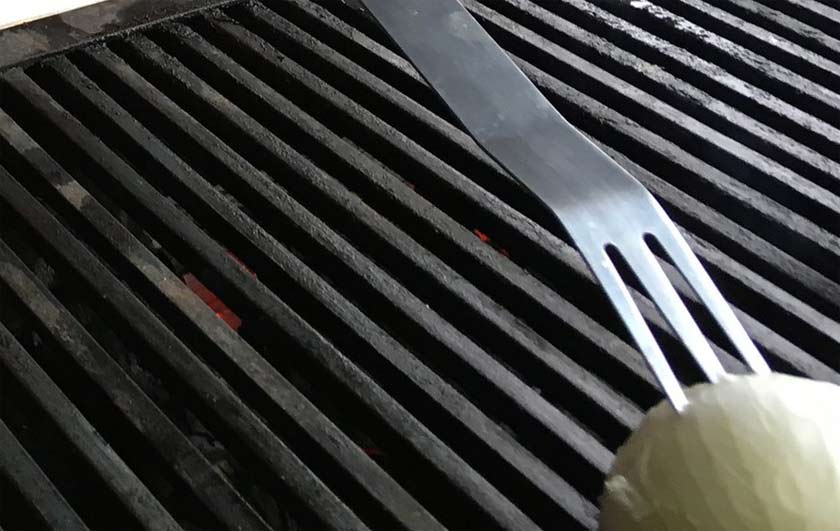 Image build on photo from Alan Levine (CC BY 2.0), via Flickr

If you have a flat-top grilling surface instead of a wire mesh, you can use the above methods, but half a bottle of beer deglazes it wonderfully. Pass a wire brush over it a few times, wipe off the residue with some bunched-up newspaper, and you should be ready to go.

Every Time You Cook

Some people like to oil their grill after use, although rust shouldn’t be an issue since most quality gas grills have porcelain-coated cooking surfaces. However, it’s almost mandatory to apply a little oil before using it; if your food doesn’t stick in the first place, cleaning up will be that much
easier. Peanut oil is best for this, as it has a very high smoking temperature.

If you have an uncoated griddle, this also helps to season it, making it last longer and giving it a kind of non-stick surface. The oil can be applied with either a spray bottle or a paper towel, but remember that oil is flammable! Do this before turning on the burners.

Right after using your grill, you’ll probably be hungry, tired, and eager to claim your seat at the dinner table. However, this is also an opportunity to save yourself some trouble later on. While the grill is still warm, the food particles left on it haven’t yet had a chance to dry and harden.

A quick swish-swish with a wire-bristle brush can remove a lot of gunk that would otherwise make cleaning your gas grill a chore. If you somehow don’t yet own a long-handled wire brush, a ball of aluminum foil held with tongs can do the trick (eventually). If some large particles have been left behind, you should use a grill scraper beforehand to avoid ending up with a clean grill and a filthy brush.

Or, of course, use a brush with an incorporated scraper: 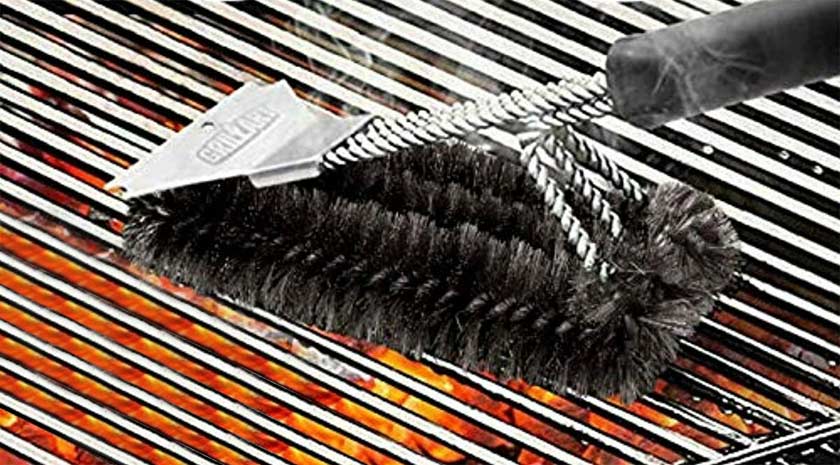 Most of us are completely in favor of anything that saves us work. Steam-cleaning may seem like something more suited to carpets and upholstery, but actually works pretty well at cleaning gas grills, too.

This is especially true if instead of following the suggestion above you’ve let a dirty grill sit for a while. If you don’t have a dedicated steam cleaner, Simply fill an all-metal pot or baking dish halfway with water, place it over a burner turned to low, close the lid and leave it for 30 minutes or so. Be careful when opening the lid, but you should find that all the baked-on goo has been loosened.

After this (and once it’s cool!), you can remove the grill and scrub it with steel wool and the following mixture:

All the dirt should come off easily with a little elbow grease. If you’ve let things slide a little and the grime is really baked on, though, you can also try spraying the grates with a 1-to-1 mixture of vinegar and water before steaming. Too much vinegar may cause some metal parts to rust, though, so use this as a last resort.

Although the major concern when cleaning a gas grill is to have a hygienic surface to work on, grease dripping down onto the burners and their covers can gradually decrease your grill’s performance. How often you need to take care of this problem will depend on how often you grill, but once a year is a good rule of thumb.

Whenever deep-cleaning a gas grill, it’s an extremely good idea to turn the gas supply off at the canister itself, or even disconnect it completely. Now is also a good time to check the hose; if there is any visible damage, the only thing to do is replace it. If you’re not completely sure that you’ll be able to reassemble everything afterwards, you might also want to take pictures with your phone as you go along.

Dealing With the Heat Tents

After removing the grate, remove the heat tents (also called flavorizer bars or burner tubes). Some of these can simply be picked up; if not, check your owner’s manual for details.

Caked-on grease and carbon deposits on these components can seriously affect your gas grill’s heat distribution and cause flare-ups. So mix some of the natural cleaning solution above with water, place one end of the element into a bucket, and scrub thoroughly using a wire-bristle brush and steel wool. If your grill has lava rocks, don’t bother trying to clean them; just get new ones.

Here’s what Weber recommends for what they call the grill burner tubes:

If your owner’s manual approves, and you’re confident that you can put them back together, you might also want to remove the burners themselves for inspection. The heat tents give them some protection against debris falling from above, but their vent holes do sometimes become clogged, reducing your gas grill’s effective BTU rating.

These can be cleaned in exactly the same way as the flavorizer bars, but it’s recommended that you scrub from side to side – otherwise, you might end up pushing dirt into the burner’s interior. If any holes remain blocked, just clear them with the end of a bent paperclip. Make sure to rinse each thoroughly, including on the inside.

At this point, you might as well take the time to clean the tray inside, too. This is one of those dirty jobs you probably don’t want to do, but it won’t get any easier if you leave cleaning your gas grill until next year.

A putty knife, wire brush, a whole lot of your cleaning solution, and some old newspaper will be helpful here. Also remember to remove the propane tank and anything else that might be stored in the base before you start. And once you’re done be sure to reward yourself with a beer.

Cleaning out the cook box is, without a doubt, the absolute worst part of cleaning a gas grill, but you really can’t neglect it. If left too long, built-up grease may ignite while the grill is in use, ruining dinner and also burning down your patio. In fact, this is the reason health inspectors check ventilation hoods in restaurant kitchens so carefully: an accumulation of vaporized grease can potentially reduce the place to cinders.

This is also the reason you shouldn’t cover the base of the cooking tray with foil. Although aluminum will usually melt before it catches fire, the large surface-to-volume ratio of foil can change this dynamic. However much easier it would have been to keep a gas grill clean in this way, when it comes to things people “don’t want in their back yard”, an aluminum fire certainly qualifies.

Let’s not forget that fire is inherently dangerous: an estimated 2,600 grill fires occur in the United States every year, causing an ave rage of 100 injuries and 10 deaths. As it happens, the vast majority of these are associated with gas grills. Not only that, but periodic cleaning and inspection, as well as using the grill correctly, could have prevented the majority of these.

What to Look for in a Trampoline

How to keep a Clean House with Pets