What Is CO? Is it Toxic? Symptoms? Causes?

There are, unfortunately, plenty of things in everyday life that can kill you. A traffic accident, slipping in the shower or choking on a chicken nugget can all happen when you least expect it.

Most of these risks are pretty well understood. We know what precautions to take, as well as what to do when the worst happens. Did you know, however, that you may be in a certain kind of danger right now without even realizing it?

Important Note:
While we believe all the information in this article is accurate, you should really not be getting critical medical advice off the internet. If you have reason to be concerned or are experiencing some of the symptoms we’ll describe below, you should look for professional assistance.

Carbon monoxide can’t be seen, smelled or tasted. The only way to know abouts its presence is when the concentration level becomes high enough for a carbon monoxide detector to alarm you, or when you start having symptoms. In the latter case though, you will only know it’s coming from carbon monoxide when you know about this invisible killer.

I remember hearing a story a few years ago: a woman phoned a nurse to ask about something unrelated and just happened to mention that she was feeling dizzy. After a few questions, the nurse ordered her to grab her children and get out of the house right now. By quickly recognizing the early symptoms of carbon monoxide poisoning, she very probably saved three lives.

These symptoms include headaches, dizziness, nausea, rapid heartbeat and chest pains (more on this further down below). If you continue to breathe the same air, things rapidly go downhill from there – and if you don’t have a working carbon monoxide detector, you might never even realize what’s going on until it’s too late.

The Difference Between CO and CO2

Although people without a science degree sometimes confuse them, carbon dioxide and carbon monoxide are very different animals: 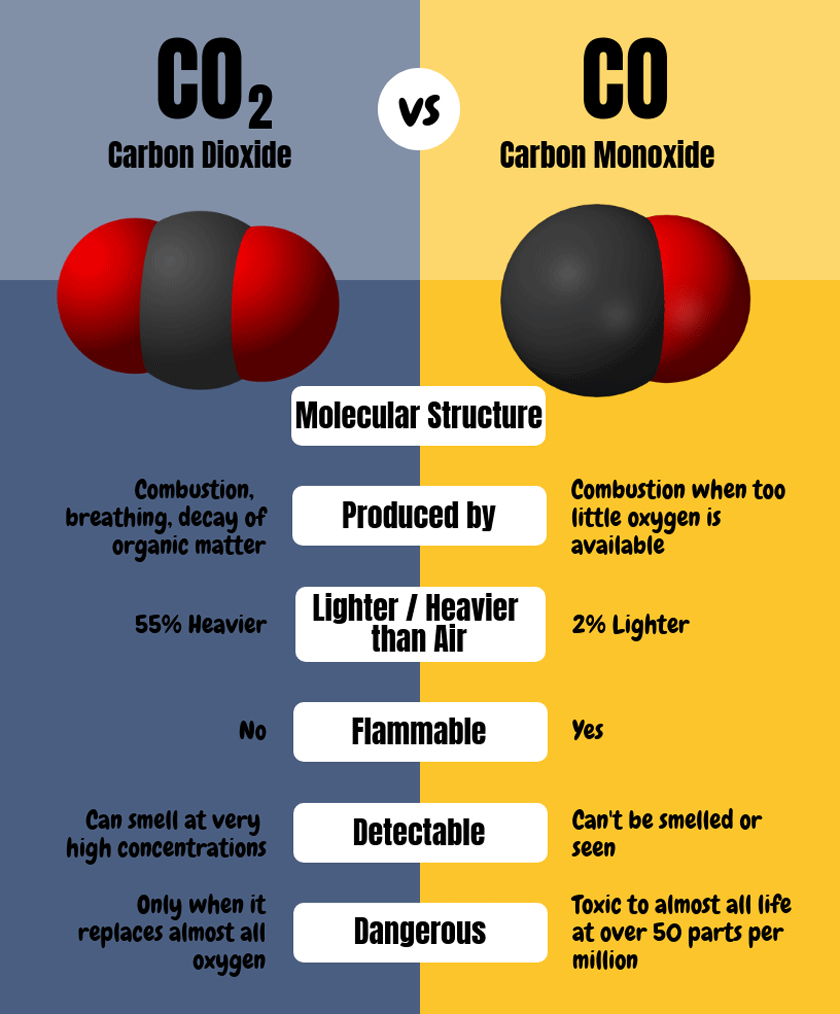 Original Image, copyrighted. Can be used when given attribution

What is Carbon Monoxide Made Of?

As you can see in the table above, both carbon monoxide (or CO) and CO2 are made up of the elements carbon and oxygen. This is the only way in which they’re really the same, though.

The exact composition of a substance matters a great deal when it comes to chemical reactions. H2O, for instance, is pure, healthy water, while H2O2 will burn your skin and even explode in some circumstances. If you’re terrifed of one day suffocating in a stuck elevator from carbon dioxide building up, we understand, but this is basically impossible. CO is the one to worry about – in fact, it’s the leading cause of poisoning in many developed countries.

Sources – Where does CO come from?

Since the only difference between CO and CO2 is that extra oxygen molecule, you’d be right in assuming that this has something to do with how carbon monoxide forms. Whenever something burns without sufficient oxygen reaching it, carbon monoxide is created.

While there are natural sources of this toxic gas (e.g. volcanoes and chemical reactions in the atmosphere caused by the sun’s rays), people concerned about this danger should be thinking in terms of everyday items in their home that are powered by coal, oil, propane or any other kind of fuel.

Some sources of carbon monoxide include:

The main way CO kills is by reducing your body’s ability to transport oxygen to where it’s needed. The gas, once inhaled, attacks your red blood cells, leaving them unable to do their job. This means that your cells and organs can’t work properly; the initial effects are sometimes mistaken for food poisoning or a sudden bout of flu.

As exposure continues, especially at very high levels, the number of red blood cells affected can reach or exceed 50%. Once this happens, it’s very likely that the patient will die or slip into a coma. If they get medical attention quickly, though, their chances of survival go up significantly.

When patients are given pure oxygen to breathe, it usually takes the body about 24 hours to expel all the CO from their blood – carbon monoxide is very quick to attach itself to blood cells, but slow to leave.

In severe cases, an unlucky victim may be left with long-term effects like impaired memory, heart problems and hearing loss, but it’s very likely that they’ll make a full recovery – especially if they are treated as soon as possible.

It’s also important to understand the difference between chronic and acute exposure, which are just technical ways of saying “long-term but at low levels” and “brief but intense”. Most doctors will be able to diagnose an acute case within minutes, but the effects of chronic exposure are much less well-understood.

Chronic CO poisoning may, even at levels that are usually considered safe, seriously damage your nervous system and heart over time – blood cells aren’t the only ones affected by it. Once symptoms of a condition like this turn up, the cause can easily be ascribed to something else, meaning that statistics on chronic CO exposure aren’t very reliable. In fact, some researchers have estimated that a third of all carbon monoxide poisonings are never identified as such.

This section is almost certainly the most important one you’ll find here: skip over everything else if you like, but it’s very important to be able to tell you if or someone else may be in critical danger. 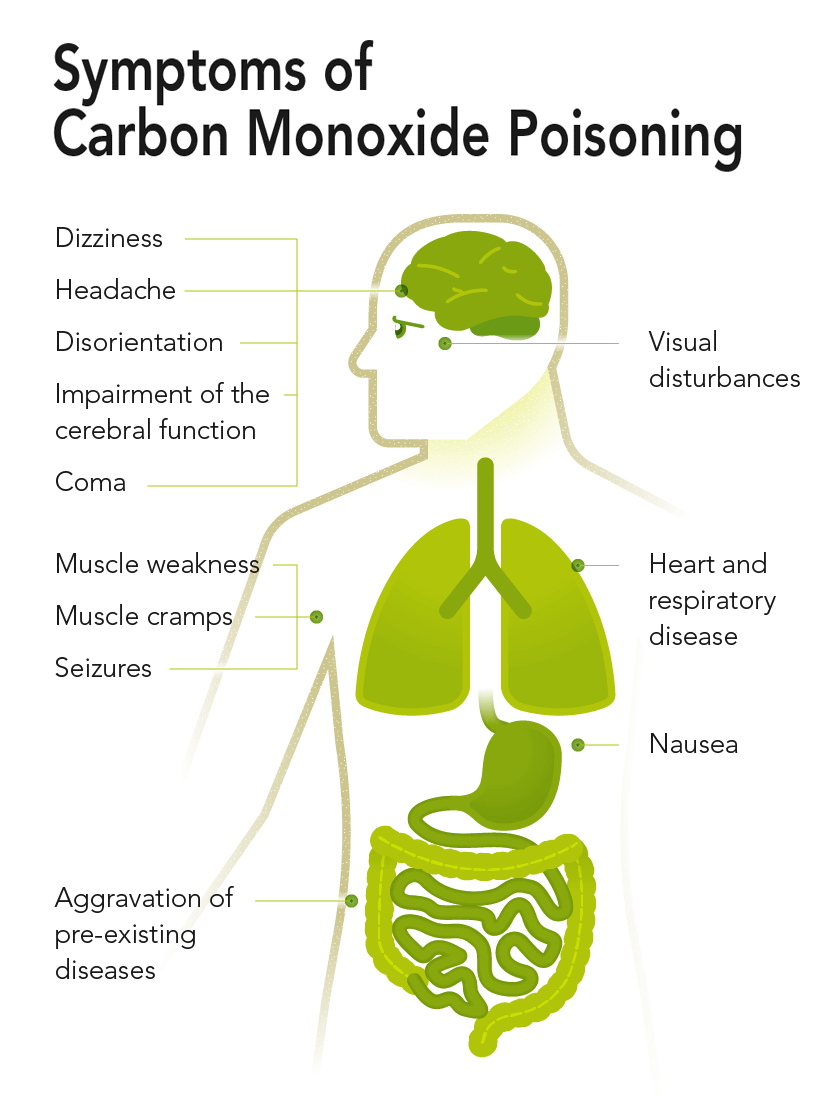 Original Image, copyrighted. Can be used when given attribution.
Image derived from Wikimedia Commons

One of the most tragic things about carbon monoxide poisoning is that it clouds your judgment, often without you realizing. This factor prevents many people afflicted by it from taking action in time.

Another problem is that these symptoms aren’t unique to breathing in excessive CO; many of them can also be caused by anything from a head injury to a bad batch of clam chowder.

The thing to keep in mind is that the symptoms tend to appear in a certain sequence as carbon monoxide levels rise or you spend more time in a polluted environment.

If you notice them appearing in the order below, it’s probably a good time to head outdoors as fast as possible (the abbreviation PPM, by the way, stands for Parts per Million, meaning that 10,000 PPM is only 1% by volume).

Original Image, copyrighted. Can be used when given attribution
Data derived from:
https://www.abe.iastate.edu/extension-and-outreach/carbon-monoxide-concentrations-table-aen-172/
https://en.wikipedia.org/wiki/Carbon_monoxide_poisoning
https://www.kidde.com/home-safety/en/us/support/help-center/browse-articles/articles/what_are_the_carbon_monoxide_levels_that_will_sound_the_alarm_.aspx

If you’re experiencing more than one of these effects without clear reason and you don’t have a fever, it’s a really good idea to leave the structure as soon as possible.

When you get right down to it, very few accidents are actually totally inevitable or unforeseen. More often, they’re the result of carelessness or a lack of knowledge. In the Third World, an unbelievable number of people are hurt or killed each year simply because they use indoor fires for cooking.

This educational problem isn’t confined to poorer regions, though: in 2005, 43% of Americans questioned said they believed that running a generator in a basement was safe, while a third didn’t see the point of having their furnaces checked every year. Only 17.2% of homeowners had CO sensors near where they sleep, while 65.6% didn’t even bother with a gas alarm at all.

These numbers are a clear indication of why carbon monoxide continues to kill about 500 people in the U.S. every year while sending an additional 20,000 to the hospital. The basic reasons are three-fold:

The last cause of CO deaths may seem a little on the weird side, but it’s most definitely valid: Carbon monoxide poisonings always peak during power outages, cold snaps and natural disasters.

Many families, not understanding the risk (or out of desperation) then use outdoor-only appliances like gasoline-powered generators or charcoal grills inside their houses – right when the emergency services are least able to cope with additional patients.

Who are Most at Risk?

No living creature with hemoglobin in its veins is immune to carbon monoxide poisoning, which means pretty much anything and everyone whose blood is red. However, as with most medical conditions, the stronger and healthier you are to begin with, the less likely a new problem is to get serious. Some people will want to take particular care, though:

Apart from your physical characteristics, you might also want to think about how quickly you’ll be able to get help – statistics show a remarkable imbalance between deaths attributed to carbon monoxide and non-fatal emergency room visits in the same category. This proves that access to prompt treatment is vital.

Not surprisingly in light of this fact, people working in cold, remote areas are at significantly higher risk than most others. This can be explained partly due to the living arrangements some of them have to cope with, but also by greater difficulties in reaching a hospital.

How to Prevent CO Poisoning at Home

An ounce of prevention most certainly beats a pound of cure. Some of the actions needed to keep you and your family safe from CO poisoning may seem difficult, expensive and unnecessary. Be sure, though: many people who’ve thought the same thing have ended up regretting it.

As long as you’ve been paying at least half-hearted attention up to here, you probably now know 90% of what anyone needs to about carbon monoxide poisoning. We certainly hope you never need to use anything you’ve learned here, but if you ever do, you’ll be very glad you took five minutes to read this article. Thank you.

The source information we used and linked to throughout this report are mainly studies and other scientific articles, so if you’re looking for more in-depth information just follow the links.