Under Pressure - a Weather Changing Condition

Although the word “meteorology” has been around since 1600, the study of weather prediction only dates from the middle of the 19th century. That’s long before air pollution became a problem, but it’s still relatively young.

It all began when the British government started to correlate the weather observations from hundreds of naval and trade ships. The result looked like this: 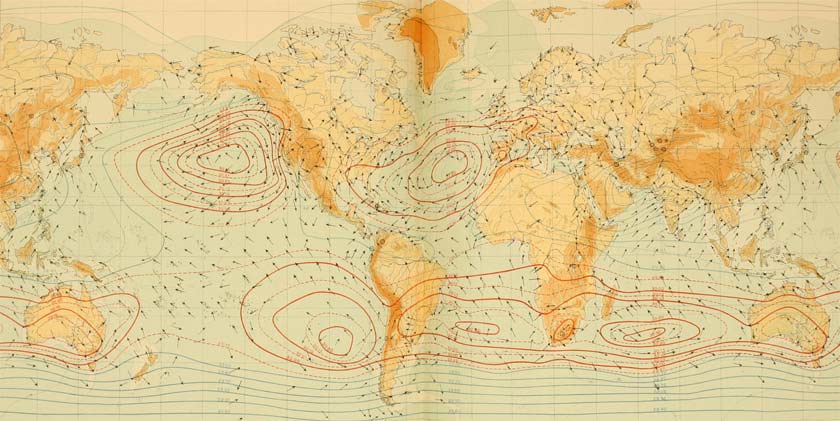 When the pressure and wind readings were compared, along with the captains’ notes on general weather conditions, it soon became clear that weather is not random.

Nor is it local: whether it snows in London depends on what the weather in New York was like a week ago. High winds and stormy seas did not, as it were, appear out of thin air, but followed patterns that can be analyzed, described, and predicted. Barometric pressure lies at the heart of all of this.

What Exactly Is Barometric Pressure?

The lines on the map above are called isobars; the word “iso-” means “the same”, so these lines connect points with equal atmospheric pressure. They give a nice visual representation of weather systems, but where does this pressure come from and what does it mean?

Although we rarely think about it, there’s a column of air about 300 miles high pressing down on you right now.

Air isn’t heavy, but a whole bunch of it still weighs a lot. The atmosphere pushes down on you at a whopping 15 pounds per square inch (this is at sea level; the higher up you go, the lower the air pressure becomes). Also, gasses exert pressure equally in all directions, not only downwards.

There are a number of ways to express barometric (or atmospheric) pressure. In North America, the most common unit of measurement is inches of mercury, but some others you might find on a barometer include:

Average barometric pressure falls with altitude, and the boiling point of water decreases along with air pressure. In the city of La Paz, Bolivia, water boils at only 190 °F (88 °C) instead of the usual 212 °F (100 °C) at sea level. Cooking an egg takes about twice as long at that elevation.

What Causes Barometric Pressure to Change?

Strangely enough, yet obvious when you think about it, is the phenomenon of atmospheric tides. Just like oceans, the atmosphere is attracted by the gravity of the sun and moon, meaning that barometric pressure rises and falls slightly every 12 and 24 hours.

More importantly, we all know that hot air rises. To state this a little more precisely, the density of a gas decreases as the temperature goes up. So, when sunlight heats a spot on the earth’s surface or water vapor in the air itself, the mass of air above that point weighs less, and air pressure decreases.

On a day-to-day basis, most parts of the world have fairly similar weather. Some regions tend to have barometric pressures that are a little higher or lower than the global average (most of the time). The area within about 10° of the equator, for instance, receives a great deal of solar radiation, turning it into a permanent low-pressure zone.

How Does Atmospheric Pressure Affect the Weather?

“Convection” refers to a gas or liquid being forced upwards because it’s warmer than the surrounding medium. This is perceived as low pressure, on the surface.

Original Image, copyrighted.
Can be used when given attribution.

So, a drop in atmospheric pressure means that moisture-laden air is likely to be sucked upwards.
The atmosphere also gets colder the farther up you go, so at some point the water vapor in the rising air will condense (or even freeze) when it reaches the dew point, forming clouds.

This same process runs in reverse when barometric pressure rises.

This principle is the most important factor electronic weather stations take into account when predicting the weather in your immediate area. Rising pressure usually means clear skies; diminishing readings make cloudy weather more likely, while a rapidly falling barometer can indicate an approaching storm. The specific reading isn’t all that important in this regard; what matters most is in which direction the needle moves over the course of hours or days.

The lowest pressure ever recorded at sea level is 25.7 inches of mercury (870 mbar), measured as Typhoon Tip was crashing into Eastern Siberia.

You will probably have heard of the Butterfly Effect: basically, even a small change in the weather at one point on the globe eventually influences, however slightly, conditions on the other side of the world.

Keeping an eye on your home barometer will give you a pretty good idea of what the sky is up to, but to really understand weather, you need to know something about low- and high-pressure systems. These move around the map in a way that’s sometimes difficult to predict, often causing the pressure where you live to rise or fall dramatically.

It would be logical to assume that winds blow from a high-pressure zone towards wherever the pressure is lower, but things are a little more complicated than that. Although the details aren’t important, the earth’s rotation and the principle of conservation of angular momentum result in what’s called the Coriolis effect.

What all of this means is that, in the Northern Hemisphere, areas of high pressure rotate clockwise when seen from above, and the opposite with low-pressure systems. It is what causes most of our winds, especially where a high- and low-pressure system collide. This boundary is often referred to as a front: a warm front if hotter air is displacing colder and a cold front in the opposite case.

Low barometric pressure is known to aggravate a whole range of medical conditions ranging from migraines to arthritis. If someone says it’s going to rain because they “feel it in their bones”, this might be the literal truth.

The Art and Science of Weather Prediction

Watching barometric pressure changes is arguably the most important part of weather prediction. There are many other factors to keep in mind, though, and even with the best measurements and computer models, meteorologists sometimes still get it completely wrong.

Once you understand a little about their thinking, though, you can look at weather reports in a bit more depth. What if that low-pressure cell from the south takes a sharp left? Will a few days of hot weather dissipate that cold front before it gets to you, or should you be planning for an indoor weekend? Figuring out the answers to questions like these is rarely a case of life or death, but it does make for a fun little game, and learning more about the natural world is never a complete waste of time.