For Everyone with a Compressor

If you’re anything like me, you’ve probably been guilty of buying a tool or two knowing that you’re probably only going to use it once – a miter saw just to finish one room, a basin wrench for that one solitary faucet you plan on replacing this year, or a cute gadget like a drill bit sharpener, which, after playing with for five minutes, turns out to not be such an essential part of your life at all.

When you buy a compressor, however, you’re really getting a jack of all trades. Whether decorating, building, working on a vehicle, or just doing general carpentry, using this device – when paired with the right accessory tools – makes you much more productive, and also cuts down on the elbow grease required. What’s more, air-driven tools tend to be much cheaper than their electric equivalents. Once you have the compressor, adding more power tools to your repertoire doesn’t have to break the bank.

The most important factor to keep in mind when choosing an air compressor is its SCFM (Standard Cubic Feet per Minute) rating. This is simply the amount of air it can deliver when being used continuously at some defined pressure. If this is too low, you will to have to stop using your air tools periodically while the tank gets filled back up. Fortunately, it’s easy to compare the typical air requirements for various tools and to shop for a compressor accordingly. The following table might help, although similar air compressor tools can differ significantly in their requirements: 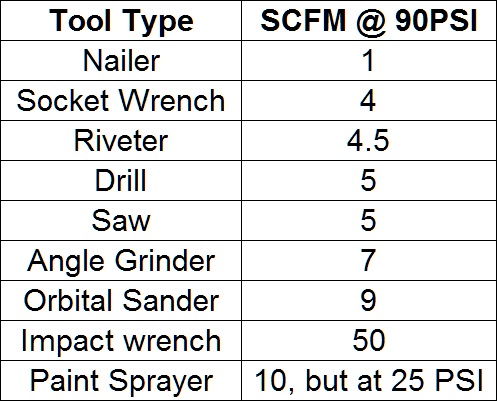 Other specifications to keep in mind are the tank size, which becomes important when you use a lot of air within a short time, and its pressure rating, although almost all tools are designed to work with 90 PSI. If the pressure drops below this figure when an air compressor tool is fully engaged, performance will suffer and the tool might be damaged.

Compressors come in a variety of sizes – from large stationary models intended to drive a whole workshop worth of gear, to dinky little battery-operated units fit only to top up tires. Since they can cost anything from several hundred to over a thousand dollars each, it’s definitely worth it to learn how compressed air systems work and to select the best one for you.

Are you a farmer who often works far from any electrical outlet? A gas-powered compressor is what you need. Do you do roofing? Overly long hoses aren’t ideal for both safety and performance reasons, so you will probably choose the kind you can pick up easily.

Can you imagine holding a sheet of plywood up to a framework with one hand, and fixing it solidly in place in under a minute with a hammer? This impossible task is made easy with the help of a framing nailer.

These are some of the most productive air compressor tools, compared to their traditional counterparts. The nails (which are available in various sizes) are stored in the nail gun’s magazine, meaning that there’s no fiddling about between shots. Each nail is driven in straight and right up to the head without marring the surface, even through tough wood and by an unskilled operator.

Other kinds of fastening tools are also available for specialist work, including heavy-duty models that effortlessly drive 3.5″ nails into beams and those that fix indoor trim without leaving a conspicuous head. When working with metal, you will also appreciate the ease and convenience of an air-driven riveter, which is actually called a “hydraulic riveter” due to its internal mechanism.

Trying to hand-paint a car using brushes and rollers would require numerous coats and an insane amount of sanding and polishing, at least if you were aiming at an even halfway decent result. When you have an air sprayer, this is still not a job for total amateurs, but it will be considerably easier. 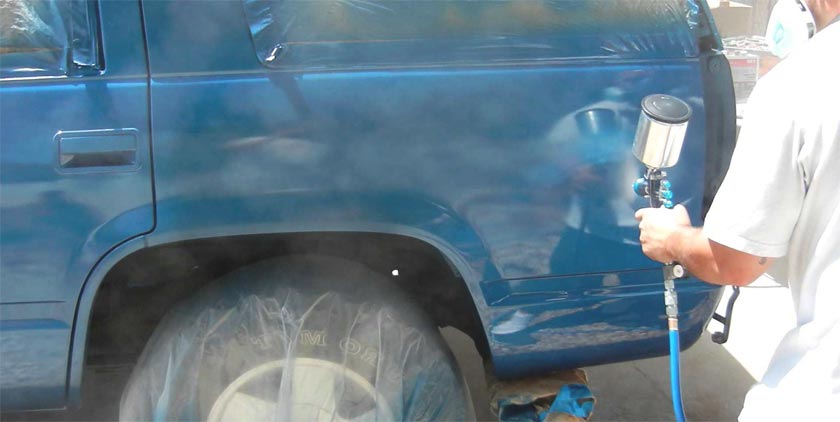 Compressed air sprayers can make a bit of a mess, use up a lot of paint, and tend to overspray, but they do produce a smooth, neat finish. Whether you’re varnishing a cabinet or painting a wall, this is another area in which an air compressor tool shines at saving you time.

For some reason, as if the effects of time and corrosion weren’t enough, some people continue to overtighten nuts and bolts until they squeal. When it comes for removing one, sometimes the traditional methods like banging on it with a hammer, heating it with a blowtorch, or swearing at the offending fastener aren’t feasible, or simply don’t work.

No mechanical workshop that already has a compressor can really do without a pneumatic socket wrench and impact wrench. The latter dislodges the most stubborn bolt instantly and with little effort, while an air-driven socket wrench puts paid to awkward arm movements, stripped threads, or damaged heads. Some models can also be set to apply a given amount of torque, which is really useful in industrial assembly applications.

Electric power tools have a number of disadvantages. First, the motor has to be both heavy and expensive to attain real power, and once this is done, getting rid of excess heat can become a problem. Achieving high levels of force and impact is problematic, and each tool can do only one thing, instead of being an easily interchangeable attachment.

It’s not the case that electric tools don’t have their place; for one thing, they’re far more energy-efficient than compressed air. But air compressor tools are generally much simpler to design – lighter as well as more powerful. At this point, almost any power tool you can name can be found in both air and electric versions.

Since air compressor tools are both more powerful and ergonomic, holes can be drilled and materials sawed much more quickly and accurately than with electrical tools. Orbital sanders, air hammers, and powered shears intended to cut sheet metal are all available, can’t overheat, and will continue to operate at 100% for as long as they have pressure. Chances are good that however specialized your application, if other people have ever had the same task there’s an air compressor tool that will help.

Is an Air Compressor Really Worth It?