How Air Pollution Affects your Quality of Life

Breathing freely is important; in fact, it’s something most of us make a point of doing. It’s even made its way into our vocabulary: a creative idea is a breath of fresh air. If it’s really useful and not just a last gasp, it might even cause you to breathe a sigh of relief. When it solves some kind of problem, you’ll have some breathing space and nobody will breathe down your neck.

It’s actually a shame that we take air quality for granted much of the time. In the past, ignoring the dangers of atmospheric pollution has led to disaster. During the Great Smog of 1952 in London, for instance, over 10,000 people died and another 100,000 became sick – and the event only lasted 4 days.

Improved emissions legislation has made such a disaster much less likely, but we’re definitely not out of the woods. Worldwide, today, an estimated 7 million people die annually as the result of indoor and ambient air pollution. You may think that you and your family are safe, but there’s a good chance you’re not. To better understand the risks, it makes sense to first look at AQIs: Air Quality Indices

Although every air quality index has a scientific basis, most countries have their own. Regional differences may occur due to using different epidemiological data (studies linking pollution levels to disease), what’s practically achievable in terms of controlling pollution, and perhaps political lobbying.

The discrepancies can be pretty wide, though: 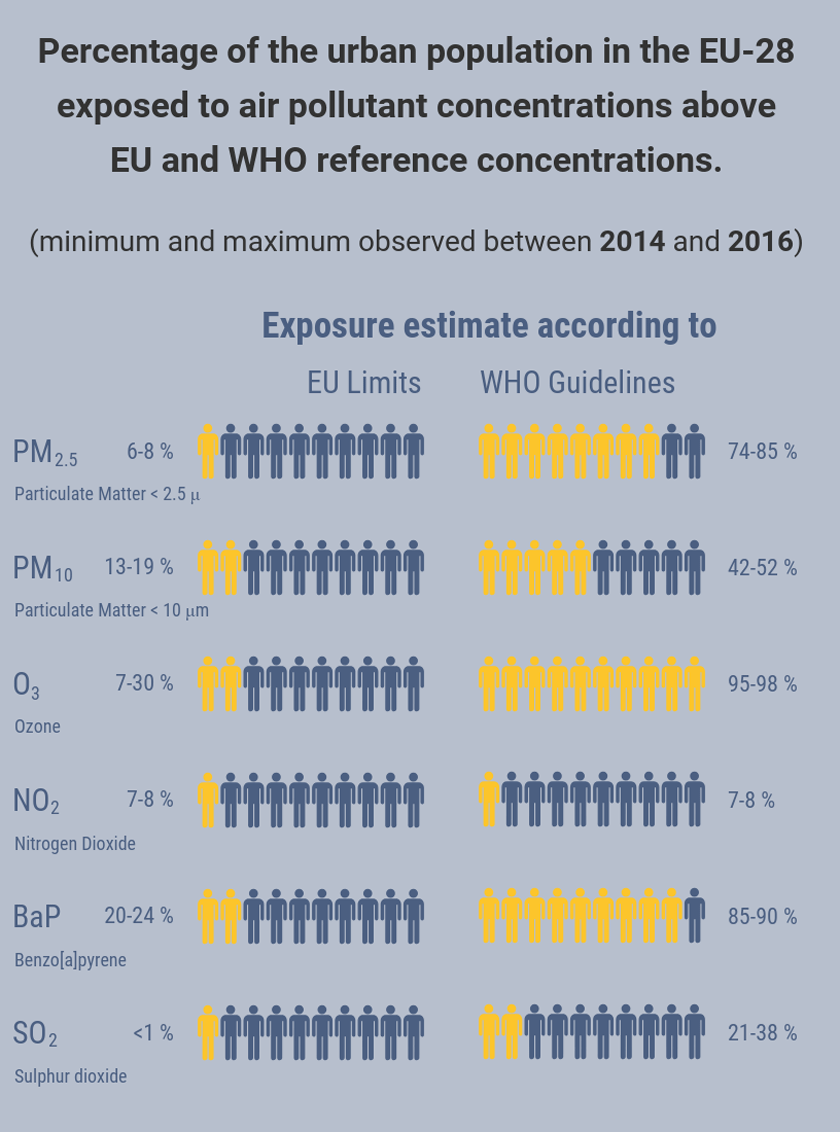 Original Image, copyrighted. Can be used when given attribution
Data derived from this EEA publication

So if we take the average of the 2014-2016 period, according to E.U. guidelines, only 18% of people living in urban areas are at risk of health problems due to ozone (O3), yet this figure rises to 97% when applying the stricter World Health Organization limits!

This may seem bizarre and alarming.

The thing to remember, though, is that any increase in pollution increases the risk of illness. Considering that these diseases include lung cancer, stroke, pneumonia and heart disease, it’s always worth paying attention to the rise and fall of AQI figures.

How is AQI Calculated?

The basic idea behind air quality index numbers is to give ordinary people something they can check at a glance to help plan their day or week. This means that the result usually boils down to a single number, sometimes along with specific warnings.

An AQI value is an estimate of how large a dose of toxins the average person will receive during a day (or any other specified period).

It’s assumed that this fictional individual will spend a certain amount of time indoors (where air is normally cleaner in some ways but more polluted in others), near traffic, and in other microenvironments with different contamination profiles.

For practical reasons and because it’s usually not necessary, not every kind of pollutant is included in the AQI calculation.

Most commonly, sulfur dioxide, ozone, particulates, nitrogen dioxide, and carbon monoxide are measured, but the exact mix varies by country. Chemicals like VOCs (Volatile Organic Compounds) and chlorine are normally not checked, as their contribution to health problems tends to be minimal in most cases.

The next major difference internationally lies in how gas concentrations in different parts of a city or province are thought to lead to different public health outcomes. Some government bodies use complex equations based on the combination of different harmful gasses, while others use the figure corresponding to the most dangerous pollutant on any given day.

What do AQI Values Actually Mean?

You can find AQI measurements and forecasts on the relevant website, or they may be given along with the local weather report.

To make them easier to understand, results from pollution monitoring stations are boiled down to a simple number, color-coded depending on the level of risk. Each color comes along with a standardized recommendation, for example: “Consider reducing or rescheduling strenuous outdoor activities.”. 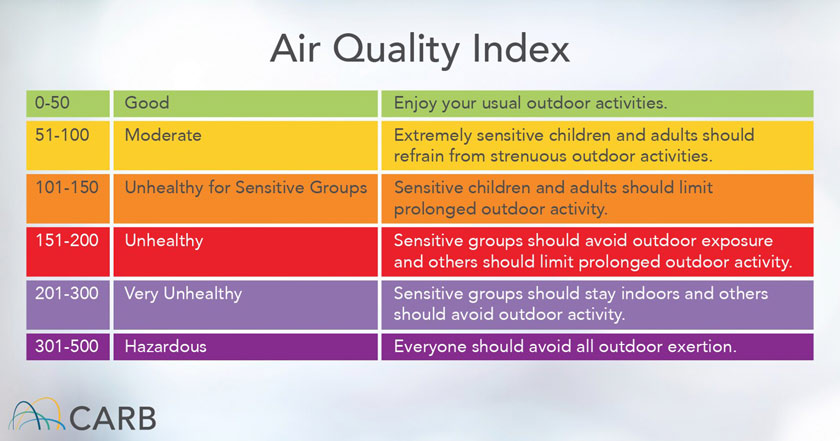 Table from the California Air Resources Board

In the United States, AQI numbers run from zero to 500. 100 is the maximum “safe” level recommended by the Environmental Protection Agency: anything below this should represent very little risk for most people. As the number rises, more and more people are likely to be affected in ever more severe ways.

A sharp uptick in the AQI number may be due to unusual events like nearby wildfires, but more commonly happens when a temperature inversion over a city or low wind speeds make pollutants dissipate more slowly.

Here’s an example of how rapidly AQI numbers can sometimes change, even prompting people with asthma or heart conditions to evacuate the area:

When something of this magnitude happens, short of suggesting you run for the hills, government may advise at-risk groups to stay indoors and avoid specific areas. They might also appeal to people to drive only when necessary, order factories and power plants to shut down until the crisis has passed, or even start distributing special breathing masks to local residents.

What Are the Main Air Pollutants and Causes?

Aside from carbon dioxide and methane, the two principal greenhouse gasses, there are numerous kinds of air pollution that affect human health. This may happen either through a short but harsh exposure, or by long-term contact with lower concentrations.

In either case, the risks are certainly real. This article is too short to discuss all harmful compounds, but we’d like to touch on a few of the most dangerous:

When it’s at very high altitudes, ozone (O3) literally makes it possible for life on earth to exist by blocking the sun’s more harmful rays. Breathing it in, however, is not something you want to do.

Ozone is formed naturally in the stratosphere and doesn’t descend to the surface. In city air, however, sunlight can cause other types of pollutants to break down into ozone, especially on hotter days.

Ozone is highly reactive and attacks the lungs and airways on contact, leaving its victims coughing, short of breath, and more vulnerable to infections. Anyone with an existing respiratory condition should steer clear, moving inside if possible.

Numerous human activities – truck tires slowly disintegrating, power stations burning coal, driving your car – result in tiny specks of dust or other substances, particularly soot, floating around in the atmosphere. They can stay up there for quite a while and even attract other noxious chemicals to their surface.

When talking about air pollution, particulates are classified into PM10 and PM2.5 categories, smaller respectively than 10 and 2.5 micrometers (0.0004 and 0.0001 inches). Their size is what makes them so dangerous: they can travel deep into the lungs, causing inflammation, and even pass through bronchial walls into the bloodstream.

Particulates are also carcinogenic, meaning that they cause lung cancer. Anyone with breathing difficulties or a heart condition should limit their exposure to this type of pollution whenever possible.

Carbon monoxide is formed when something burns without complete combustion taking place. Small amounts are produced in household appliances that use propane or natural gas, by automobile engines, from coal-burning power plants, and in several other ways.

Although it is usually found in air at only the tiniest concentrations, carbon monoxide is extremely toxic and a real killer. Though everyone should be on their guard, children, people with existing cardiovascular conditions, and pregnant women are especially at risk.

SO2 is only one chemical compound in the sulfur oxide family, but it’s probably the most harmful. It’s produced naturally during volcanic activity and is also released whenever fossil fuels are burnt.

One of the results of having too much sulfur dioxide in the air is that acid rain is produced whenever SO2 encounters water. This damages buildings, can make farmland infertile, and has a very negative effect on lakes and waterways.

When inhaled, it causes extreme irritation to the airways, meaning that anyone with a condition such as asthma and emphysema should avoid it at all costs. There are also indications that it can induce premature labor in pregnant women. Luckily, this gas smells extremely bad even at low concentrations, which provides some warning.

If you want to find out how polluted or clean the air around your nearest town is, click the link below this map: 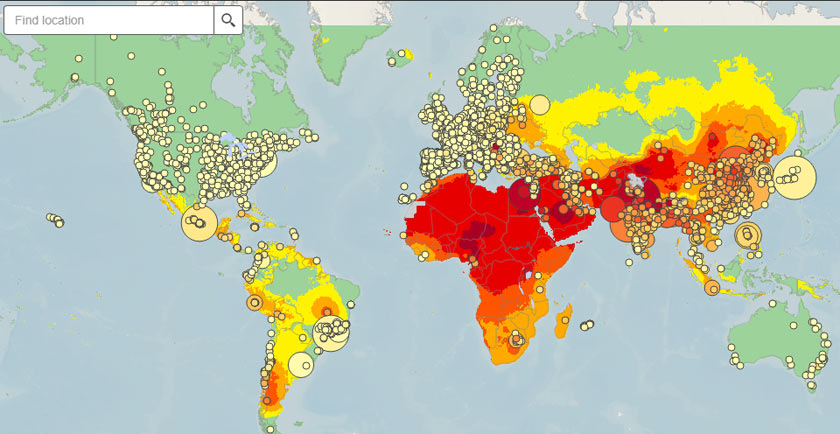 Which are the Most Polluted Cities?

When comparing pollution levels in different places, it’s customary to use PM2.5 figures (i.e. particulate levels) for simplicity and because these tend to reflect other forms of pollution fairly well. It’s also common practice to use annual average figures, or some cities will get a free pass if their air happens to be checked only during the rainy season.

Despite what you may think, Beijing isn’t the most polluted city in the world; not even close. Cities in India and its neighbors occupy 16 of the top 18 spots, the other two both being located in Central Africa.

In fact, the only “modern” city you’ll find near the top of the list is Doha, Qatar at 20th place, and the only Western Hemisphere cities in the top 100 are in Chile. You can find the full list here on Wikipedia.

Certainly, there are a lot more people living in the Third World, so you’d expect to see poorer cities dominating a list of any kind.

Still, this illustrates a pretty important point: high levels of air pollution are the result of poverty, not affluence.

Once countries have industrialized and people are able to live a little more comfortably, preserving the environment automatically becomes more important to them. As far as sustainability goes, this is one of the better pieces of news for our planet.

Over the long term, the only way the problem of air pollution is going to be solved is if we all, both as societies and individuals, change our behavior. Until then, the best we can do is try to keep ourselves safe, and arming yourself with reliable information is the first step toward doing that.

What Barometric Pressure Tells us About Weather

Why (and How) to Use a Sprinkler Controller