Is an Air Compressor Worth It?

And Should you Buy One for Home Use?

Maybe you’ve used one at work, or tried it out at a friend’s house. Perhaps you saw it on a DIY show and were impressed by the blizzard of productive activity it can deliver. Maybe you’re planning on getting into carpentry, car repair, or DIY as a serious hobby for the first time.

Whatever your reasons, anyone who’s in the market for an air compressor will end up being much happier if they do their research before buying.

What are CFMs and PSIs, and how many of each do you need?
Do all air tools work with every type of compressor?
What accessories will you need, and how much will the whole package end up costing you?
Is an air compressor, really and truly, the solution to your problems?

These are some of the things you need to know before purchasing your first air compressor. Hopefully, we can shed a little light on the subject.

An Air Compressor Is Cheaper than Electrical Power Tools…Sometimes

Each electric tool has to have its own motor, air tools piggyback off the compressor’s.

This implies that air tools of all types are typically cheaper and also more powerful and rugged than their electric counterparts. Of course, these savings have to be weighed against the cost of the air compressor itself. Assuming that you plan the contents of your workshop in advance, going the air route may save you money, but this isn’t guaranteed.

If you can’t afford all the gear you want at once, you may well decide to stick with electric power tools.

For the sake of example, let’s say you need a drill, so you buy one. Then you realize that, while your shiny new drill can serve as an impact wrench or orbital sander, it’s not especially good at either of those jobs. You buy those two as well and later throw in an angle grinder, all electrical.

Using some roughly average retail prices, these four tools end up setting you back about $300. For about the same amount, you can get a decent DIY compressor – perhaps the DeWALT DWFP55126 – plus a comparable suite of air tools.

Of course, how this math works out depends heavily on what kinds of tasks you’ll be using these tools for and what level of quality you insist on. In general, though, we can say that someone who needs a large selection of power tools, which they can switch between in seconds, will find a compressor to be the more economical option.

This principle probably comes as no surprise to you. What is worth mentioning is that, with air compressors, you generally get what you pay for: high-performance models cost significantly more than their counterparts aimed at casual users.

None of us wants to spend more than we have to, but buying an inexpensive machine may end up being a false saving. In any case, these are the parts you should see in your air compressor: 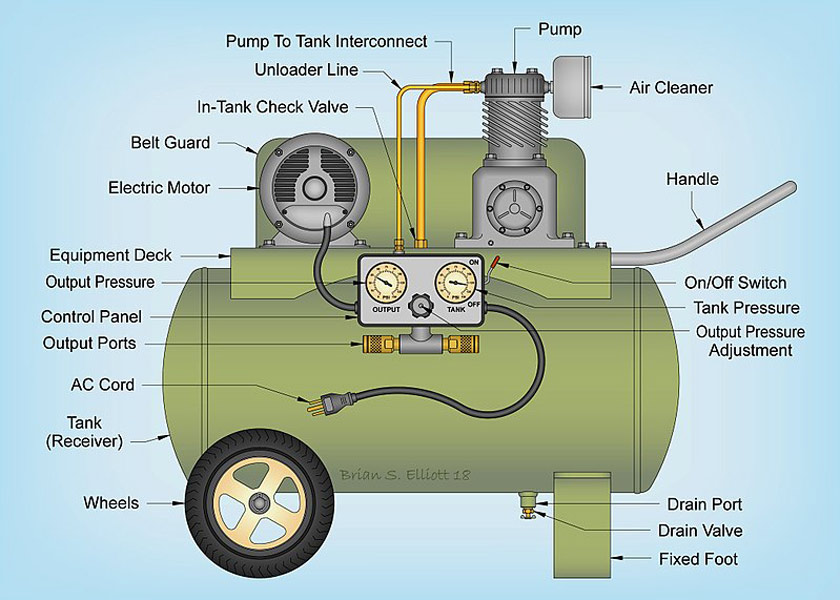 Before you decide on a compressor, you should take care to research the tools you plan to hook up to it.

Some require high pressure, measured in Pounds per Square Inch or PSI, to operate correctly.

Others need a high flow rate, denoted in Cubic Feet per Minute or CFM, to work. Some compressors are better at providing one than the other.

Their vendors also typically specify both effective and maximum figures for CFM and PSI: the lower number is the one to look at.

You’ll also need to think about whether two people will be using air from the same compressor simultaneously. Many hands do indeed make light work, but waiting for an underpowered motor to get the tank back up to pressure will only slow both of you down.

Also note that less expensive motors can’t be run continuously. Every now and again, they need to be switched off to cool down. Called their duty cycle, this matters little for small projects but can be a real pain if you have plenty of work to get through. A compressor with a 60% duty cycle has to be shut down for 4 minutes out of every ten.

Power or Portability: Choose One

The two main components of a compressor are a powerful motor and a tank meant to hold air at up to ten atmospheres of pressure. Neither of these is going to be light.

This leads to a tradeoff that will become pretty important if you plan to use your compressor outside your workshop or garage.

Some compressors, like the DeWALT Flexvolt, weigh no more than a mid-sized suitcase and can even be run off a battery rather than mains power. It is not, of course, the most capable machine out there – you can either have your cake or eat it in this regard.

On a related note, gasoline-powered air compressors tend to be more expensive than their electrical equivalents, but also more powerful than the average handyman is likely to need. They’re unsafe to use indoors, too, a major practical drawback.

Air compressors are pretty user-friendly. They are not, however, meant to be run forever without any care or attention whatsoever.

At a minimum, you will have to open the bleed valve after every use to allow condensation to get blown out of the tank. If you skip this step too often, the tank will almost certainly start rusting internally.

The air filter has to be cleaned or replaced every so often, as does the oil if you don’t choose an oil-free model. Your user manual may recommend a few other tasks; it’s best to pay attention to these.

No guide of this length can cover all the bases of buying an air compressor for home DIY or light commercial use.

Noise level is one such aspect that comes to mind. Some compressors aren’t much more annoying than a desk fan, others are capable of waking the dead.

Some can be lifted onto a pickup truck bed by one person, many aren’t designed to be moved at all once installed.

These are only two major areas in which compressors differ greatly. This fact makes it worth doing your research. Once you’ve clarified your requirements and seen which models meet your needs, though, this is one of the most satisfying pieces of equipment you’ll ever buy.

Put simply, air tools are just more powerful and ergonomic than their electrical equivalents, allowing you to do more in less time, with fewer mistakes and greater enjoyment.

Best Air Tools to Use With Your Compressor